HEF2010a is a large concert organ by Casavant built for the new Grand Theater in Hefei, another project of the Poly Group QUANGO.

This installation (Op. 3883) was Casavant’s first pipe organ in Mainland China, although the firm had been considered nearly 90 years earlier for the contract for DMF1922. Along with HEF2010a, Casavant also built a II/5 and pedal practice organ, for which see HEF2010b.

The specs can be found at: https://www.casavant.ca/english/our-instruments/in-concert-halls/  (scroll down and click on Hefei)

Information about the Grand Theater can be found here: http://en.polyculture.com.cn/business/&c=17&i=72&comContentId=72.html 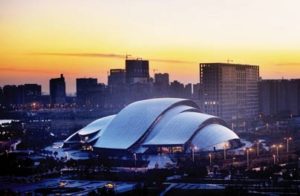