HKG1927b is a II/13 tracker action pipe organ in St. Margaret Mary’s, Happy Valley, built by William Charlton Blackett after he set up his own organ building firm in Hong Kong around 1924. The church was completed and dedicated in January 1925. The organ was installed in 1927 and dedicated in February 1928.

Presumably some of the strange spellings on the drawknobs originated with Blackett’s Chinese workers. According to research now in progress in Hong Kong, it appears that this organ was hand-blown from the time of its installation in 1928 up to the early 1980s. Why this was the case is not known. Hong Kong had advanced infrastructure for the time, and one of the main electricity generating stations was in North Point, not that far from the church. It may have just been a cost-saving measure. In the 1980s, a jury-rigged motor, utilizing bicycle wheels, differential gears, and chains, was attached to the bellows. This Rube Goldberg-type contraption was removed about 1994 and a proper organ blowing mechanism installed.

This organ appears to have had some work other done on it in the  1970s and 80s, possibly by Detlef Kleuker or another European builder. The Pedal Bass Flute 8′ appears to be a later addition, tracker action on a separate chest, and made of different woods from the Bourdon 16′. This makes sense, as Blackett’s stock models only contained a single 16′ Pedal stop. An overhaul of the organ was considered around 2010, and rejected as too expensive.

When it was surveyed for the Project in 1997.  Prof. Urrows played it and found that it filled the building admirably with a sweet tone. The power of the Pedal Bourdon, and of the combined Gamba celeste (almost a Montre céleste) were most impressive. The organ is partly functioning at present, and the church has installed a Rogers electronic organ on the floor of the sanctuary. 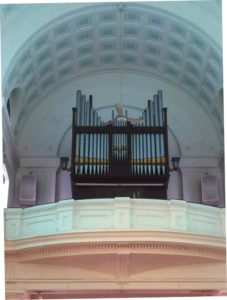 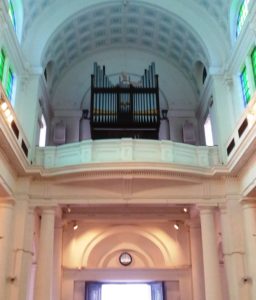