PEK1682 was an organ built by Tomás Pereira for the Kangxi emperor in 1681-82, with an unknown number of ranks and attached to a carillon mechanism featuring the Chinese instrument, the yunluo. Periera wrote in 1682:

“The King [sic.] wanted me to make another organ [PEK1682], in addition to the one I already made [PEK1679] (which I haven’t described or shown in the drawings because it is quite ordinary.) This one, however, has to play by itself without being touched, and has to play along with a Chinese instrument called the yunluo, which consists of discs of bronze arranged in a frame. When they are struck by a small mallet (although in the drawing I have enclosed, each disc has its own proper mallet) [it must be] coordinated so as to play the same tune along with the organ, something upon which the King insisted (and no creative, ad libitum stuff.) But in spite of all these difficulties, with the help of God I will make this or another instrument to the King’s satisfaction, who at [Chinese] New Year [1683] will show this off, as if a marvel, to the mandarins of the Court.”

Ferdinand Verbiest also described this instrument (“ingenho de musica”) and explained that it was installed with the organ division on the ground, and the yunluo somehow elevated, “like our carillons that play the hours on a large clock in Europe.” The melodies played, according to Verbiest, were Chinese songs (“cantiga Sinica”).

The automatic, barrel-driven playing mechanisms in Athanasius Kircher’s Musurgia universalis (1650) appear to have shown Pereira and his colleagues how to construct such complex devices.

Barrel mechanism for a carillon, from Kircher’s Musurgia universalis. 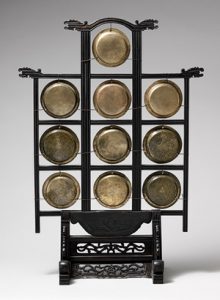 Yunluo, of a type similar to that used by Pereira in PEK1682.