PEK1888 was the second organ built by Aristide Cavaillé-Coll for a church in Beijing, after PEK1884. The contract was negotiated directly with the Vicentian priest in charge of the new Beitang, Alphonse Favier.

In a cost-cutting measure, Favier had designed the case himself replicating the façade of the church. Cavaillé-Coll Op. 607 was ready for shipment on 16 August 1888, and was shipped to China by the Messageries Maritimes. When the organ and its paperwork arrived in Shanghai, there were difficulties over customs matters which took a month to resolve by the French consul and the local Vincentian procureur. Some of the packing cases had also been damaged.

The new Beitang was consecrated on 9 December 1888, but the organ, according to the English-language Chinese Times in Tianjin, “arrived late, is very complicated, and it was not found possible to get it into working order in time for the consecration.” As a result, the brass band of the Seminary (of which Abbé Alexandre Provost (see PEK1872), who was in charge of erecting PEK1888, was the Director) provided music for the dedication of the cathedral, and the liturgy was sung, unaccompanied, in plainchant. The organ, in its locally-made Neo-Gothic case, was finally inaugurated on Easter Sunday (21 April) 1889.

This organ was a stock model, a two manual and pedal Model 22, The asterisks indicate the probable two stops in this particular organ that were transferred to the Récit.

The organ was badly damaged during the Siege of the Beitang during the Boxer Uprising in the summer of 1900. Still functioning to some extent, it was finally overhauled and enlarged in 1927 by Anton Biszkupits (1886-1937), a Czechoslovakian organ technician and instrument builder who lived in Beijing from 1919 until his death. The exact extent of his renovations have not been uncovered, but it appears he added an electric blower and some additional stops at this time.

Father Wang Jizhi (王基志, 1908-2005), Superior of the Beijing Diocesan Major Seminary, stated in his “A Short History of Pipe Organs in Beijing”, published in 1991:

“In 1958 the church was “relinquished” to the government and nobody looked after the organ. And so it gradually deteriorated. In 1965, the Central Conservatory of Music and the Beijing 39th Middle School, which occupied the Beitang, exchanged the organ for a piano, and took it [PEK1888] away for “research”. They dismantled the organ and numbered all the parts. They intended to re-erect it in the concert hall of the Central Conservatory of Music. [But] because they didn’t know how to rebuild the organ, they abandoned it. During the Cultural Revolution some parts went missing. There are some parts remaining in storage at present [1991], but it is not working.”

In April 2009, the Project interviewed a elderly parishioner of the Beitang who said that not only did he remember the organ, but that he had played it himself. When asked what had happened to it, he said that “the organ was dismantled by students and removed to a fine art school [or, ‘college’], and they didn’t destroy it, but used it for some other purpose.” He also refuted the idea that the organ had been taken or destroyed by Red Guards in the Cultural Revolution. 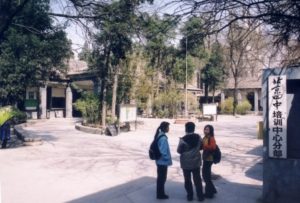 Cour d’honneur of the Beitang, 2002, when the buildings were still a part of the 39th Middle School. 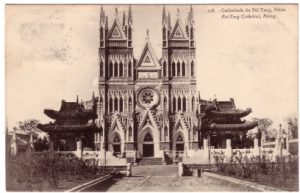 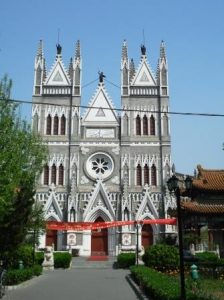 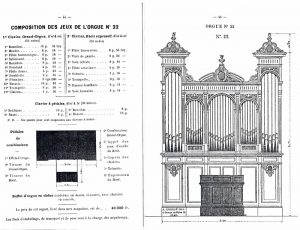 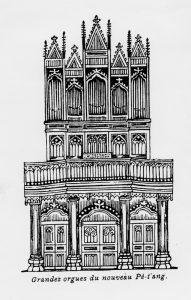