A positive organ with an immensely elaborate case, built by Léopold Deleuze and his Chinese students as a gift for the son of Napoleon III. The instrument, in partly-restored condition, is now in the Musée de la Musique in Paris (https://philharmoniedeparis.fr/en/musee-de-la-musique).

Upon completion, the instrument was sent from Shanghai to Paris, but was not well-received:

“After the first organ for Dongjiadu (SHA1857), Brother Deleuze made other, smaller ones, and made a very special one a little bit after this which was sent to Paris to the Prince Imperial, son of Napoleon III, in the name of the students of Zikawei. Some acknowledgements came from the Tuileries, but it seems that this work of patience and skill was not so highly esteemed [there] as in Shanghai, and very little was said about it.” (Fr. A.-M. Colombel, Histoire de la mission de Kiang-nan, Part 3/I, p. 571.)

According to Fr. Colombel, Deleuze made seven other small positives (Colombel called them “harmoniums with bamboo pipes, and 2 harmoniums with brass reeds (2 ranks).”) It is just possible that one of these small bamboo positives survived into the second quarter of the twentieth century, see: FCW1931.

SHA1858 is the only known surviving organ from the Zikawei workshop. For a detailed examination of SHA1858 and its cross-cultural meanings, see: David Francis Urrows, “The Bamboo Organs of Nineteenth-Century Shanghai”, Nineteenth Century Music Review, Vol. 11/1 (June 2014), 113-34. 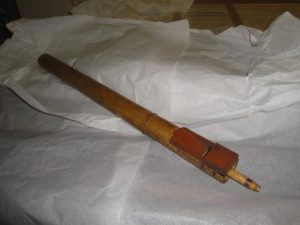 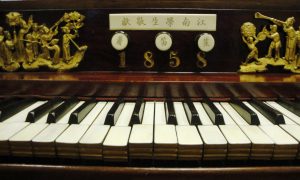 Detail of keyboard, stopknobs, and the inscription “From the students of Jiangnan, a tribute gift”, SHA1858.