SHA1881 was a major rebuilding of SHA1857 and SHA1861, undertaken by François Ravary some years after the death of Léopold Deleuze in 1865.

After Deleuze’s death, Ravary tinkered with the Dongjiadu organ from time to time. A.-M. Colombel wrote that in December 1879, “At Dongjiadu, Father Ravary revived the Zikawei brass band of 1858 [Hippolyte Basuiau had sent the instruments from France in this year]. He also fixed up the great organ, over which he had taken so many pains ten years [sic.] earlier, and he added some new ranks which he was happy to be able to play.”

Two years later, another priest, Toussaint Faixpoux s.j. (1851-1901), one of Ravary’s students, wrote that “We spent the Feast of St. Francis Xavier [3 December] at Dongjiadu with Monsignor Garnier. The Cathedral was very well decorated, and Father Ravary inaugurated four stops of his organ, the only ones which were ready under the circumstances. When the other twenty are in place, it will truly be an instrument worthy of a cathedral, even in France.”

Ravary completed his final expansion of the organ to a three-manual and pedal, 24-stop instrument in the early 1880s. Perhaps on account the two decades which had passed since Deleuze’s death, he included some standard wooden pipes for the open diapasons in this renovation, and possibly for some other stops as well. In 1886, he reported in a letter to his friend, Dr. Léon Dufour , that “Solemn chords from the famous bamboo organ, made years ago by Brother Deleuze, were heard as our young scholastics and some seminarists sang during the Episcopal mass.”

This was the final rebuilding of the ‘Bamboo Organ of Tungkaoo’ by Ravary before his death in 1891. The very last rebuilding of this remarkable installation came in 1918, when Henri Lécroart (see in connection with DMF1922) was installed as Bishop co-adjutor of Southern Zhili province. Lécroart, who was quite interested in pipe organs and music generally, was consecrated at Dongjiadu on 2 February 1918, at a service in which “[a]n interesting feature was…that the singing was accompanied on the old bamboo organ…” Some repairs seems to have been done prior to this service, without however much effect.

The North-China Daily News later commented that “It would be better if it were completely in tune, for a long wave beat, similar to the short one which gives the beauty of the tremulous vox cœlestis, betrays the fact that it is not.” Lécroart swiftly set about arranging for a renovation of the organ, with some alarming changes:

“The organ, which was built some fifty [sic.] years ago, looks its age, though time has not apparently impaired its functions. Nevertheless its unique character is about to be lost, for metal pipes are to take the place of the bamboo which has made the organ so remarkable…The keys are stained by time…[and] of the stops…all of them [are] performing their work efficiently…The bellows are frankly mediæval. On each side of the organ are two short boards with thickened foot pieces on which the blower stands and works his legs much as if he were riding a bicycle.”

It is not clear if metal pipes (perhaps only used in some ranks) were indeed eventually included in the 1918 renovation, but concerns were readily expressed about this, one writer commenting that as a result ‘the noted instrument will lose much of its public interest.’ In 1928, F.L. Hawks Pott noted the organ in his seminal historical study of the foreign presence in the city, calling it “an organ constructed by the French Fathers, which is unique, as the pipes are made of bamboo, and, as far as we know, is the only one of its kind in the world.”

In 1932, Fr. Roger Doherty, SSC, assisted at Midnight Mass on Christmas Eve, and wrote a lively account of his experience, including some indications of the music performed:

The organ thunders forth the “Adeste [fidelis]”, the same that makes the Christian heart beat faster the world over. It is taken up by a well-trained choir and their Latin words are distinct. Then follows the scarcely less impressive “Angels we have heard on high”, sung in Chinese up to the joyous refrain “Gloria in excelsis Deo”…The big organ peals forth the music of the Mass. (By the way, this organ is unique. It is said to be the only one in the world that has its reeds [sic.] made of bamboo.) The sermon is preached in Chinese…The “Puer natus est nobis” is sung afterwards…”

The organ was destroyed by Red Guards in August 1966 during the Cultural Revolution, according to a Project interview with the sacristan conducted in 1990. 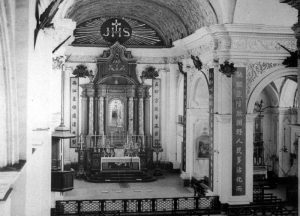