Replacing the earlier organ by Renton (SHA1909), in 1912 St. Andrew’s received a new two manual and pedal pipe organ built in London by R. Spurden Rutt, also given by Mr. Gore-Booth (donor of the SHA1909) who paid 540 GBP for it. SHA1912 had 10 stops, and the Great and Swell were divided to allow the organ to be constructed on either side of an arch (see photo). The Shanghai Daily Mail reported on the montage in May 1912:

“This Organ was built by Mr. R.S. Rutt to the order of Messrs. S. Moutrie & Co. …since the arrival of the Organ on the steamer Flintshire on April 10th, the work of erection has been carried out by Messrs. Moutrie & Co. …Owing to the smallness of the building, the voicing of the various stops is no easy matter, and the results are highly satisfactory, the full Organ building up magnificently from the softest stop…the action of the manual organs is tracker, while a modern type of pneumatic action – the most up-to-date in Shanghai – is fitted to the pedal Organ and the larger pipes which take the place of casework. The pedal board is of the type known as radiating and concave, while another feature of the arrangements is the balanced swell pedal…Such casework as is necessary to enclose the front portion of the organ has been executed in dark teak, and the appearance of the woodwork and pipes, which are plain polished, is very handsome…”

While the exact specs of SHA1912 have not been uncovered, it appears the stops were distributed 4-4-2; and there were four couplers (presumably SW/GT, GT/Ped, SW/Ped, and GT octave.) The instrument was dedicated on 15 May 1912 when the organist of Holy Trinity Cathedral, Ronald B. Hurry, played a brief recital consisting of the Sonata No. 5 in F sharp minor, Op. 111, by Josef Rheinberger, the Andante in F major of Henry Smart, and two “Sketches” by Robert Schumann (from the Skizzen für den Pedalflügel, op. 58.)

In 1998 the Project located St. Andrew’s in a dilapidated section of Shanghai’s Hongkou (Hongkew) district (see photo). It had been divided in six or more tiny apartments, and the residents did not know it had previously been a church. In March 2010 we found the entire area, starting from the corner where the church had been, demolished for redevelopment at the time of the 2010 Expo. 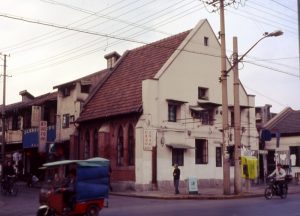 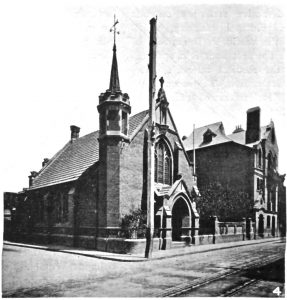