Although the German Protestant community in Qingdao had an organ as early as 1910 in the iconic Jugendstyl DEK church (see TAO1909), the principal Roman Catholic church in the city, St. Michael’s, was only completed in 1934. A Rieger organ was ordered in 1931, and installed in 1934.

As with the slightly later Rieger in Ichowfu (Linyi, see ICF1936) the specs have not yet come to light, but it appears it had pneumatic, or electro-pneumatic action, combination pistons, and other accessories. Anecdotal evidence collected by the Project in Qingdao claims the organ had 2,400 pipes, but this number seems excessive for a two-manual instrument.

The organ survived the Second World War, and an interesting account can be found in: Thomas E. Crew. Combat Loaded: Across the Pacific on the USS Tate (College Station, TX: Texas A & M University Press, 2007), p. 155.

The organ was destroyed in the Cultural Revolution, according to accounts collected by the Project in Qingdao. A new organ for the church (not a replica) was built in 2008 by Jaeger and Brommer, see TAO2008. 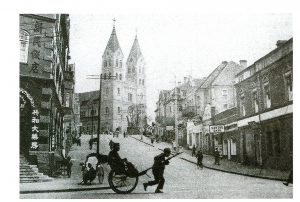 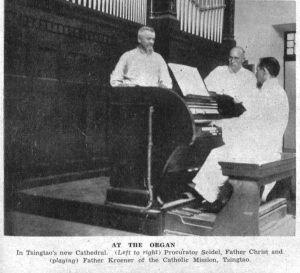