164th Anniversary of the Dedication of the ‘Bamboo Organ of Tungkadoo’.

The 15th of August is the Feast of the Assumption in the calendar of the Roman Catholic church, and the national holiday during the First and Second Empires in France, as it is also the birthday of Napoleon Bonaparte (Bastille Day was ‘relegated’, as they say in sports.)

The organ, constructed by the Jesuits in Shanghai in 1856-57, stood for 109 years in the Church of St. Francis Xavier at Dongjiadu, until it was destroyed in August 1966 by Red Guards during the Cultural Revolution (1966-1976). The loft, which had been built for the organ in the first half of 1857, is still there, but the organ is now a very vague and distant memory. We remember today especially François Ravary SJ (1823-91) who was the mastermind behind the instrument.

It has been a source on endless frustration that no image of this, the first of the bamboo organs built in Shanghai, has ever been located. However, the book which Father Ravary and his colleagues used in the building of the organ still survives in the Bibliotheca Zikawei. This is the actual copy used by Ravary. In one of his letters, he describes the organ as having a “Gothic” case, and for lack of anything else, here is a Gothic case from the Manuels-Roret which was used for the project: 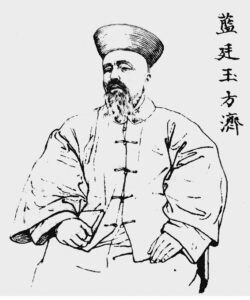 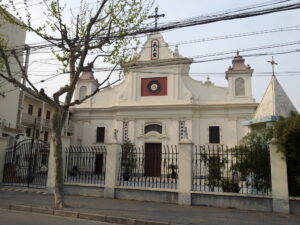 The whole story of Ravary and his colleagues and students will be told in Prof. Urrows’ forthcoming book, François Ravary SJ, and a Sino-European Musical Culture in Mid-Nineteenth Century Shanghai, to be published later this year by CSP.