At the end of Chapter 1 of Keys to the Kingdom (pp. 50-54), I wrote a few cautious paragraphs about what music might actually have been played by Jesuits (and others) on the organs of seventeenth-century China. There has been, over the past 25 years, a lot of speculation about this topic, and the question of how the office was sung, to what music, etc. Some of it remains in the realm of possibilities; a lot more of it is sheer fantasy by pseudo-scholar performers. As I wrote, “we enter into a completely speculative world of shadows and hypotheses when we try to find a prudent answer to the question of what music would have been performed on the four or five early pipe organs of China.”

Nonetheless, hypotheses have to be made in order for knowledge to advance. In remarking on the Portuguese political and cultural dominance of the China mission at this time, I mentioned a group of popular Iberian composers of the day, including the Spaniard, Francisco Correa de Arauxo (ca. 1576-1654). I also commented that “it is frustrating not to be able to say that one member of the second or third generation of China missionaries might have had a copy of de Arauxo’s influential 1626 Facultad Organica.”

This week, the Lubranos, well-known antiquarian dealers in rare music editions and manuscripts in New York, advertised for sale an original copy of de Arauxo’s Facultad. Describing it as “a rare and important early source relating to the organ, organ playing, and organ music in tablature notation”, the catalog price is a whopping 14, 500 USD. But what struck me most was the handwritten inscription of the original owner on the title page (below): “Collegii Parisiensis Societat. Jesu.”, that is, the Paris College of the Jesuit Order.

This does not offer prima facie (or really, any) evidence that a copy of this work did eventually get to China. But it is intriguing that one of the few surviving copies (only about 12 are known) was owned by a Jesuit College. This certainly is highly suggestive, and it offers a bit of support for the hypothesis that music of this kind — tientos and versos in the Iberian style — would have been just what organists such as Diego de Pantoja, Manuel Rodriguez, and Tomás Pereira would have played in China. For those interested, there is modern edition, edited (poorly) by Macario Santiago Kastner (Union Musical Española, 1948/52; reprinted 1974), and which costs a lot less than the Lubranos’ copy (see “New Acquisitions July 2019” at https://www.lubranomusic.com/catalogues.php). 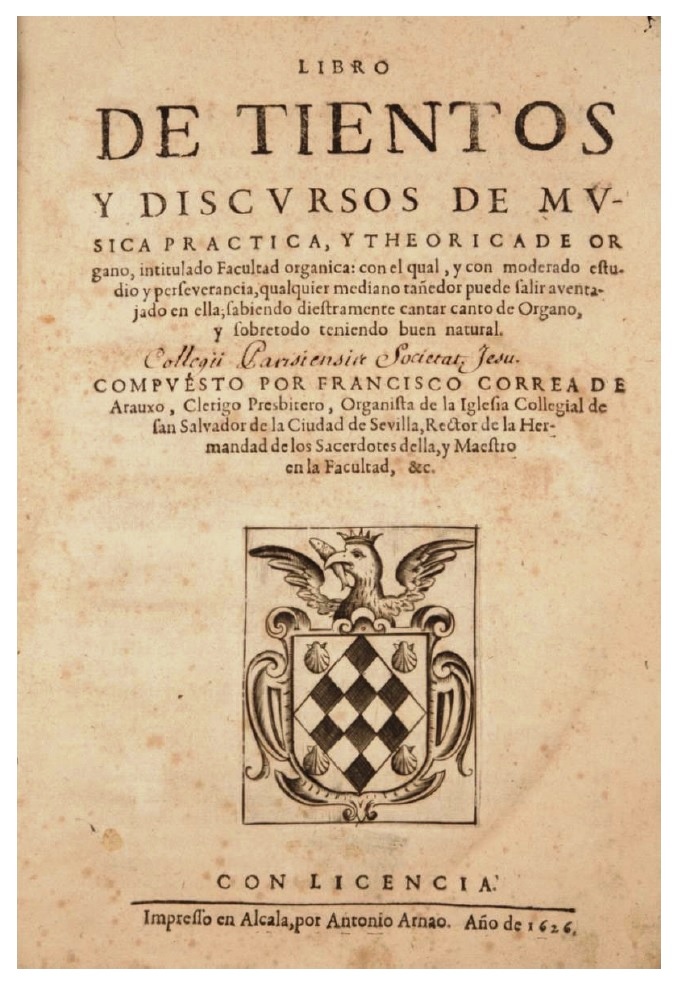