Christmas and Holiday Greetings from The Pipe Organ in China Project.

There are three updates for new installations this month, all oddly in Zhejiang Province:

Of these, the Ningbo installation of a 1908 Hinners organ is significant as the third known relocating of an existing organ to China. This is of course a trend that should be encouraged, despite a certain resistance to the concept in context. The Hinners firm was located in Pekin, IL, and it is somewhat amusing to know that the name of the town has been attributed to the (erroneous) 19th C. belief that Peking (Beijing) was on the exact opposite side of the globe from the town. The earliest known pipe organ in Korea (a I/7+Ped tracker) was also built by Hinners, in 1919 (sadly, destroyed in the Korean War.) There are also reports (unverified) of a Hinners organ in pre-WWII Manila.

The Hangzhou (Hangchow) installations at Zhejiang Conservatory are both by Freiburger Orgelbau.

We are also very pleased to tell you that, six months after launching this site, we now have over 2,000 hits. 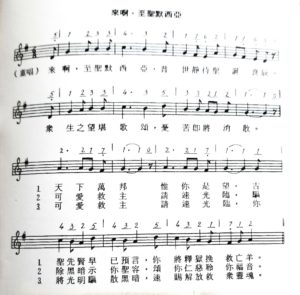 Merry Christmas! 聖誕快樂! And see you again in the New Year. POCP