DRN1914 was a small R. Spurden Rutt pipe organ built just before World War One, with one manual and 3 ranks, installed in the Anglican church in Dalian (aka Dairen, Dalny, Port Arthur):

From a surviving photograph, is does not appear that the pedal division was included in the end. The ‘violin patent melody action’ (later called a ‘part-singing unit’) was a device to double the melodic line, “practically adding the resources of a second manual and pedal organ with imposing the slightest tax upon the player.” The façade pipes were the Open Diapason 8′, “of aluminum coated zinc”, and the other three ranks were under expression in a swell box. The case was of the then-popular fumed oak

Nothing further is known about this installation, and the church no longer exists. 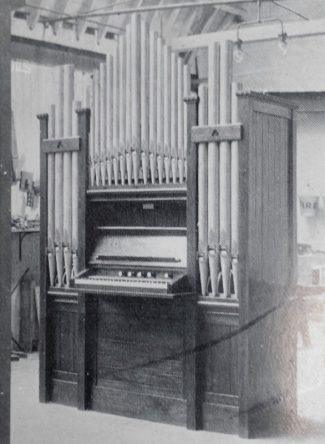