FCW1915 was a two-manual Estey installed in 1916 in the new  Lau, or Liu Mengshi Memorial Church (or Chapel.) The organ was purchased for the church by the American Board of Commissioners for Foreign Missions. It was sent out from Brattleboro in 18 boxes, along with “a series of photographs taken showing the construction of the organ from frame to finished instrument” and a “lengthy epistle” containing the installation instructions, and sailed from New York on 11 October 1915 on the SS Kathlamba.

The organ, a “3-4-1 special”, utilized hand-blown pneumatic action, and was a donation to the mission in Fuzhou from Mrs. D. Willis James of New York (the widow of Daniel Willis James (1832-1907), one of America’s richest men at the time of his death. She also paid for the construction of the church.)

Although Fuzhou was provided with electricity at this point, as with several other organs noted here hand-blown bellows were deemed more reliable; but Estey noted:

“There will be, however, considerable difficulty when it comes to blowing the organ. We shall have to use a large scale and high wind pressure and we do not believe that any one chinaman can pump the instrument. We wonder if it would not be well to make a double blow lever extending through both ends of the organ so that they can put two to four chinamen on it. It will certainly break the back of one man to attempt to blow it as the labor of blowing increases very rapidly as the pressure on which the organ is voiced, is increased.”

Fittings for an electric blower were installed, but it was never converted to this system. In a 2007 article in the Fuzhou Evening News an elderly member of the church confirmed that “four people were needed to blow the air when performing.” The organ arrived in March 1916 and was erected in the church in April with the assistance of the mission’s business agent, Harold B. Belcher. The organ was dedicated in November 1916, on the occasion of the American Board mission’s seventieth anniversary in Fuzhou.

Why the organ was deemed a ‘special’ is not clear. The shop order for the organ has not survived, and it may be that the double-handled lever was the special aspect. The specs, however, were reviewed by George Whitfield Andrews (1861-1932) of Oberlin University “who approved our suggested changes”, and so the specs given above (taken from a December 1914 3-4-1 Estey, Op. 1321) may have been modified.

By the 1920s the organ needed repairs, which were not forthcoming. In 1930, Estey gave a set of blueprints to a Miss Stella Marie Graves, who was heading to Fuzhou to teach music at the Union High School (run by the Methodist church), who appears to have gone to China with some repair materials. But by the late 1930s, it was unplayable. One of the administrators at the Union High School, George M. Newell, contacted Estey in July 1937 to say that “it remained in fair condition for some five years [after installation] as I remember it, and it has remained an eyesore for over ten years. It seems as though it would be impossible for the church where it is to raise the money necessary to keep this organ in repair.” Newell asked what Estey would give them if they sent the pipes back to Brattleboro, but the cost of shipping made it pointless, as Estey pointed out in March 1938. By May the Japanese had control of the city and plans to repair the organ stopped.

Somehow, after the war was over, the organ was in fact repaired.  The head of music at Foochow College, Oberlin-trained Albert Louis Faurot (1914-90), conducted a performance of Messiah at the church in October 1948 with a choir of over 100 voices, and it was given again at Christmas 1949, under Faurot’s direction and accompanied by FCW1915.

The Lau Memorial Church in Fuzhou, site of FCW1915, was torn down in 2005/06 before before the Project had a chance to survey it, and has been replaced by a modern building. In Chapter 5 of Keys to the Kingdom (p. 269) this church is called the ‘Peace Street Church’. The Project has finally been able to clarify that the Lau Memorial Church (AKA Liu Mengshi Memorial Chapel, or Peace Street Church) and the Methodist Tian An (Heavenly Peace, Tranquility, or Rest) Church were different buildings. The source of confusion lay in the fact that the Lau Memorial Church was also located on Taiping Lu (Great Peace Street). These two churches in turn need to be distinguished from the Methodist Episcopal ‘Flower Lane Church’, a prominent stone building constructed in 1915 in another part of the city, and now superseded by a 2006 building known as the Guanxiang Church. This new church houses FCW2018b. 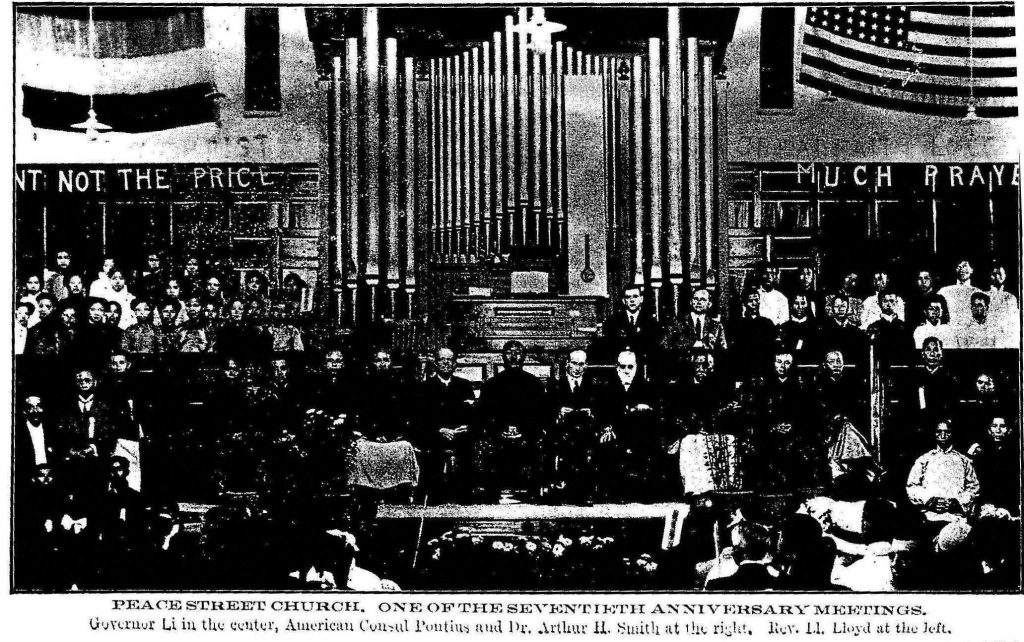 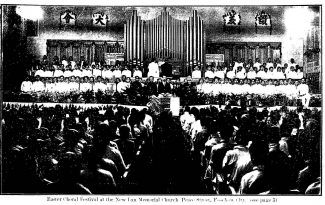