FCW2017 is an organ installed by Rieger in the concert hall of the Xiamen Organ Museum, on Gulangyu (Kulangsu) Island off of the city of Xiamen in Fujian province. The instrument is in effect a new installation incorporating parts of Casavant Op. 700 (1917), as well as an earlier 1890 organ by George S. Hutchings, both formerly in Emanuel Church in Boston, MA, as well as some architectural elements from the Boston organ.

The tortuous story of this instrument  and its re-erection is told in Chapter Seven of Keys to the Kingdom (pp. 334-37). It was purchased for the ‘museum’ in 2007 by a wealthy Australian Chinese with Xiamen (Amoy) roots, Hou Youyi (胡友义, 1936-2013). His museum is a building that opened in 2005 for the display of his personal collection of organs, reed organs, and other organ-like instruments (he had previously opened a similar ‘Gulangyu Piano Museum’.) This institution also has a 1909 Norman and Beard (III/21) and an 1874 Mackenzie, Lee & Kay (IV/61).

The organ in partly-completed form was opened on 17 December 2017, and the entire instrument was inaugurated by Olivier Latry on 23 March 2018.

The builder’s page for the organ can be found at: http://www.rieger-orgelbau.com/details/project/R_Gula/?lang=en

Another useful site is the OHS page (as this was originally a US installation): https://pipeorgandatabase.org/OrganDetails.php?OrganID=44327 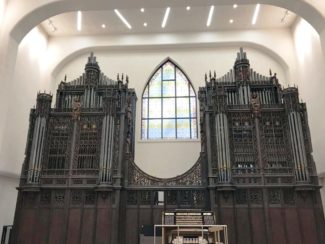