HAR1938 was the most northerly of the ‘inland’ pipe organs, and the very last instrument to be installed in Mainland China prior to the outbreak of the Second World War. It was erected in Harbin at a time when the Sino-Russian city was within the puppet republic of Manchukuo.

This instrument was a small 2-rank unit organ, with 16 duplexed stops, built by Walcker for the DEK church in 1938. Walcker Op. 2635 was probably shipped to first to Japan and then forwarded to Harbin by boat and railway.

The small photo that survives in the Walcker archives appears to show that it was located against the back wall of the sanctuary. 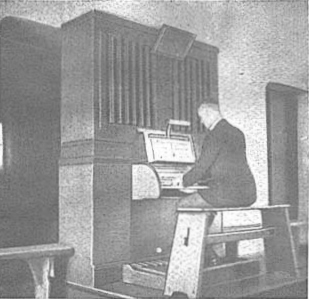