A claviorganum sent in 1615 by Rannucio I Farnese (1569-1622), Duke of Parma, to the Wanli emperor, and brought to Macau from Italy via Lisbon and Goa by Nicolas Trigault, who remarked:

“They [the gifts of the Duke] were small in number but of great value. They had made of chest, to the height of a man, [supported] with marble columns inlaid with precious gemstones. I should better speak of a credenza than a chest. Inside it is a most elegant organ and a harpsichord. The drawers of the chest, which are numerous, are full of small yet precious gifts, [miniature] paintings, rosaries, and other things of this kind, [the details] about which I will learn from the catalog [inventory] which should be sent to me soon.” (Edmond Lamalle, “La propagande du P. Nicolas Trigault en faveur des missions en Chine”, Archivum Historicum Societatis Iesu, Vol. 9 (1940), 99.)

The claviorganum finally arrived in Macau in 1620, after the death of Wanli, but was probably returned to Goa and sold. For an earlier instrument given to the China Jesuits by Duke Rannucio, see “3 Early Regals” in What’s New. 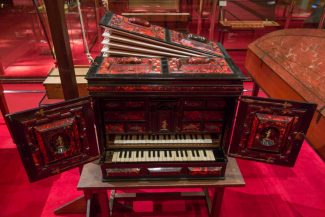