“There is an organ in the church, which is stored in a leather case. Inside are many pipes lined up like teeth, with a bellows outside; when air is blown in, sounds come out from the case. The music [played] is fast and complex, especially when all the stops are drawn [“if all eight tones sound.”]  It is suitable for accompanying the liturgy, making good music.” (Qu Dajun, Guangdong xinyu [廣東新語] (Notes on the Kuang-Tung Hsin-Yu), pub. 1700.)

A Ming loyalist, Qu wrote extensively about Macau, and Guangdong province generally. This is a very early account in Chinese by a Chinese writer of a western pipe organ. It is not known if this organ (apparently the earliest organ in China to have metal pipes) was constructed in Macau, or perhaps in Manila. 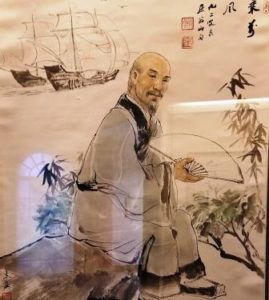 Qu Dajun, as imagined in a modern scroll painting at the Museu de Macau.