MDJ2015 (completed in 2014) is a medium-sized concert organ built by Oberlinger, and installed in the Cultural Exchange Center in Mudanjiang (pic from builder’s website.) Mudanjiang is a city in the extreme northeast of China, and borders Russian Siberia (it is far closer to Vladivostok than Beijing.)

The third manual consists of Chamades 16′, 8′, and 4′ (only), so this is really a two-manual and pedal organ with a separate Trompeteria division on its own manual. One source we have seen calls this a III/41 instrument, and it was so reported in Keys to the Kingdom; but we have not seen any suggestion that there is this much unitization in the organ. (If one counts the transmitted Chamades, this is of course an organ with 31 stops.)

Further information about the Cultural Exchange Center can be found here: http://www.rgb.com.cn/en/content/?373.html 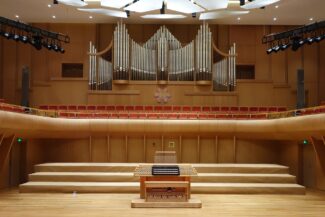