An organ mentioned by Nicolas Trigault (1577-1628) in connection with the funeral of Matteo Ricci held at Zhalan (栅栏) on 1 November 1611.

It appears this was a “processional” organ, and the Project holds the opinion that it was built in Beijing by the missionaries, and not imported. (But see “3 early regals in China”, in What’s New.) 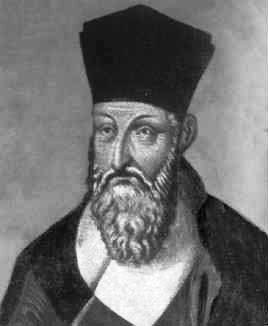 Matteo Ricci (1552-1610), in the robes of a Confucian scholar. From a portrait painted in China in the year of his death.