A small positive presented to the Kangxi emperor by Christian Herdtrich s.j. on 20 February 1672. It was on this instrument that the famous example of musical dictation was demonstrated by Tomás Pereira to Kangxi in 1679, the event that appears to have cemented Kangxi’s interest in Western music and in the pipe organ in particular.

Given Pereira’s involvement with the instrument, the Project had advanced the hypothesis that this organ was made by Pereira in Goa during his five years of formation there (1666-71). It was later described in 1736 by Jean-Baptiste du Halde as “très-petit & defécteuese en beaucoup de choses.” (Description de l’Empire de la Chine et de la Tartarie Chinoise, Vol. 3, 270 (in some editions, 334-35).)

In the Census (Appendix) to Keys to the Kingdom this organ is misnumbered as ‘PEK1672’, but it seems certain it was built in 1671 (it is correctly numbered in the text.) 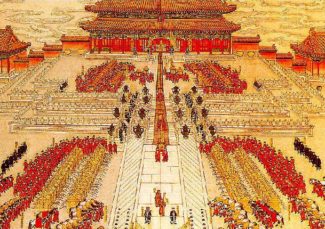