A large positive/barrel organ made by Teodorico Pedrini, presented to the Kangxi emperor on 21 April 1713. According to a report provided to the Propaganda Fide (for whom Pedrini, a Vincentian, was working) the writer, Luigi Appiani (1663–1732), noted that:

“Signor Pedrini offered a new organ [PEK1713a] which not only played like other organs, but also played some Chinese tunes by itself, after the manner of the organ in the Villa Pamfilia in Frascati, with this difference: that one was with water and immoveable, this one is [i.e., operates] without water…when His Majesty saw it he had it put by his own throne. It was necessary to make use of many craftsmen and to request a variety of materials to make such an instrument…As soon as it was taken into His Majesty’s presence, he wanted to see it before all the other things the mandarins had brought him to see. He played it repeatedly, and heard it play by itself. When he had inspected it from the top to the bottom, he praised it with expressions of great delight… A few days later, the chief craftsman who had served the Signor Doctor Pedrini had his salary increased by 5 scudi a month.” (Luigi Appiani, Report to the Propaganda Fide, Archive of the Collegio Leoniano, Cina II.)

According to Matteo Ripa, the organ would keep playing the tunes “every time you pulled its cord.”

It is possible that the 12 Sonatas for violin and basso continuo, Op. 3 by Pedrini were  composed around this time, but the chronology is the subject of some debate (see pic.) 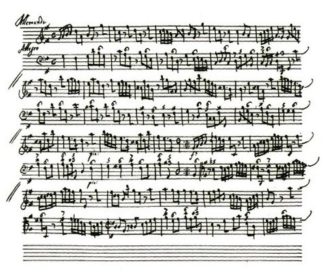