Thanks to the recent research of our colleague, Prof. Patrizio Barbieri, many important details about this organ have recently come to light. This includes a description of the instrument, an organo riquadrato:

“A pedestal-type organ [an organo a tavolino] with carved decorations in various parts, with several stops and variazioni, with a device for pumping the bellows by the performer and otherwise if one wishes [by a calcant], made by myself [Giovanni Batista Testa] in burnished and yellow gold, which in all costs 75 scudi.”

Thus, the 300 scudi paid to Ennio Filippo (as noted in Keys to the Kingdom, p. 112) seems to have been a summary payment for a range of musical devices made by the two brothers, of which the organ represented one quarter of the total. For further details about Prof. Barbieri’s research, please visit the What’s New page.

In addition to the spring-loaded pedal for pumping the wind, the organ appears to have had four stops: a ‘primo registro [first stop]’, probably a bourdon, divided so that only the lower half could be engaged; and ‘alcuni mezzi registri di flautino‘ [some half-stops of flutes]’, which probably only sounded from c1 upwards. The Project surmises that the stops were probably arranged 4′, 4′, 2′, and 1′.

Although the organ arrived in Beijing in 1720, Prof. Barbieri explains that the organ was presented to the Kangxi emperor only on 1 January 1721. While the gifts of the Pope had a symbolic quality of tribute (as the Pope was a temporal as well as spiritual ruler, and only communicated in this way on a state-to-state basis), in reality most of the musical contents of this shipment were probably intended for the mission. (What was Kangxi going to do with violin strings, or with rosin, which is what pece greca (p. 112) turns out to be?) The Project believes that the organ was brought as an eventual  gift (a ‘door-opener’) for some highly-influential person at the imperial court. It thus represents a shift at the time of the Rites Controversy of these items from tribute to commodity, and the appearance of a much more modern economy in East-West relations. 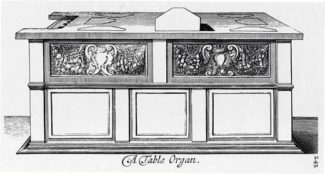