“Her Majesty the Queen, our Most Gracious Lady, in addition to other signs of inclination, gave the order in her royal generosity that 250 cruzados be given as travel expenses to every one of us going on the long journey. To the mission of St. Joseph in Peking [the Dongtang] she sent a positive, or small hand-organ made of silver (except for the legs) with a clock in a glass ball on top of it. It pleased Her Majesty to skillfully played one piece of music after another on this [instrument] in our presence. For the Reverend Father [Ehrenbert-Xavier] Frideli [1673-1743] she added a handwritten letter in Latin.”

The organ arrived in Beijing only in 1739. Hallerstein is better known for his long tenure as Director of the Astronomy Bureau. Some of the astronomical instruments at the Beijing Ancient Observatory were made by him.

Part of the Beijing Ancient Observatory, 2014. 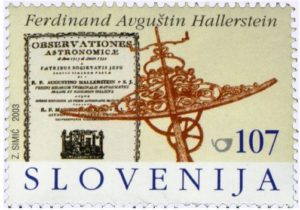 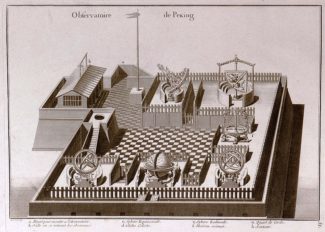