A mechanical box organ, built by the Augustinian, Sigismondo Meinardi (1713-67):

“[In 1741] I built a small organ, three palms high and two palms wide, with bellows and a cylinder, all hidden inside the sound box made of rare brazilwood and boxwood, so that outside one could not see anything but the sound box and twenty pipes. Inside there were also small bells, which I also made; [the mainspring] automatically activated the bellows and made the cylinder rotate, playing three Chinese sonatas. To crown it, with the help of Father [Giambattista] Serafino [1692-1742] I made a rooster as large as a duck, which, when each sonata ended, would stand up, raise his head, flap his wings, and sing cucùlucù.” (Sigismondo Meinardi. Epistolario. Parte prima. Lettere originali inviate a Torino. (Rome: Viniculum, 1964) Letter No. 17 (1 Nov. 1741) to his brother, 23-24.)

It is interesting to note the continuing influence of Kircher’s 1650 Musurgia universalis at this date (see illustration). 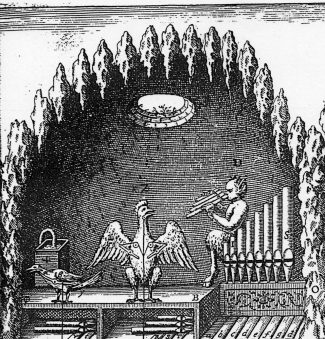