The Church of St. Michael (St. Michel) was constructed in 1902 in the Legation Quarter of Beijing. this was a part of the reconstruction of the area after the Boxer Uprising (it still stands today). A 1912 guidebook to northern China mentions “a fine organ” in the church, but gives no further details, and the Project has been unable to identify the instrument further.

The church was also used for concerts prior to 1949. For example, a French expatriate, Thérèse Amouroux, appears in 1936 in a review in La Politique de Pékin as organist for a Concert spirituel at St. Michel. The program included Gounod’s La Rédemption, performed by a choir trained by Fr. E.-G. Castel C.M. (1885-1959), accompanied by a chamber orchestra conducted by Joseph Stanislav Oroop (1896-1992). An anonymous reviewer (‘A long-time resident of Beijing’) praised the singers “who, one could see, followed with impeccable attention the precise conducting of their director and Maestro of the moment, Reverend Father Castel, Lazarist at the Beitang, who has renewed the traditions of his confrère Pedrini, celebrated organist at the court of Kangxi…”. Nothing further is known about the fate of this organ.

For the recently-installed Casavant in St. Michel, see PEK2016c 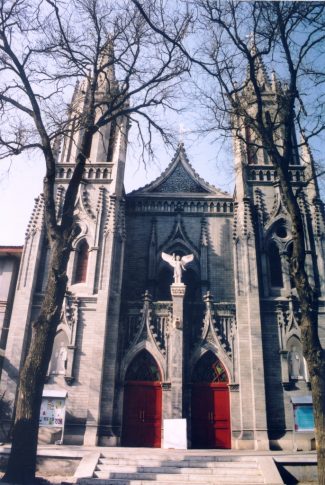