PEK1989 is the historic instrument that marked the return of pipe organs to China after a 51-year hiatus. The organ was installed in the Beijing Concert Hall, completed in 1985. This was the first concert hall in China to be built to international standards, with up-to-date acoustic properties. It was closed after Chinese New Year 1990 for seven months of ‘renovation’, which included the installation of the organ.

The Rieger-Kloss website no longer has a page for this installation  (Op. 3614). The original specs were:

There is a certain amount of unitizing and transmission in this installation, and in the Census (Appendix) in Keys to the Kingdom, the organ is given as III/60; but even this may be an exaggeration.

The dedicatory recital was played on 26 August 1990 by Australian organist, Robert Boughen. 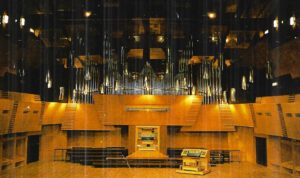 PEK1989, shortly before the Beijing Concert Hall was reopened after its installation in the summer of 1990. Note the second, electric-action console on the stage.