The American Community Church was constructed in 1924-25. While an interdenominational church, it was closely connected with the American School which lay across Avenue Pétain (today’s Hengshan Lu) in the semi-rural Western end of the French Concession, still surrounded at that date by fields. Here a large three-manual organ (SHA1934a) was built by Austin in Hartford, Connecticut, whose bid was selected from five proposals sent to the church in February 1934.

The organ was dedicated on 2 December 1934, and a recital was played by the church’s organist, Arthur N. Young (1890-1984) on 10 December 1934. The organ works played were J.S. Bach: Es ist das Heil uns kommen her BWV638 and Herr Christ, der ein’ge Gottessohn BWV601; The Bells of St. Anne de Beaupré from Alexander Russell’s St. Lawrence Sketches (which showcased the new twenty-five note Luccock Memorial Chimes), Lamentation, Op. 45, no. 1 by Alexandre Guilmant; the Andantino in D-flat major, Op. 83, no. 2 of Edwin Lemare (better known in its pop-song incarnation, as ‘Moonlight and Roses’); the Andante cantabile from Widor’s Fourth Symphony; and Lemare’s arrangement of Elgar’s Pomp and Circumstance March No. 1.

SHA1934a was an impressive instrument built into two tall L-shaped organ chambers under the arch at the front of the raised chancel, with a detached console. The Swell was in the left-hand case, and the Great and Choir in the right, with some of the pedal division unenclosed against the walls. The high degree of unitizing in the pedal division was probably due to the shallowness of the platform under the arch.

The organ was damaged during the Second World War, and the motor which powered the blower was stolen at the very end of the war. In a 1998 interview with the organ’s former caretaker, the Project was told that in August 1966 “it was badly vandalized by students from Shanghai Conservatory. They came in here on the first day of the Cultural Revolution and tore the heart out of it. They knew exactly what they were doing, because they were music students.”

The caretaker also said that he kept the console in the church (now known as the International Church) until early 1990, but when the Project first surveyed the church (on Easter Sunday 1990) there was no sign of it.

The cases of the organ chests are still in situ. The condition of the interior of the chests is not known at present. 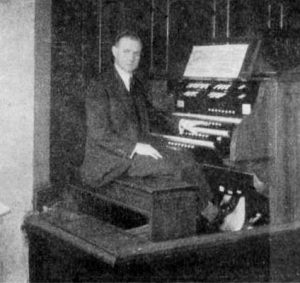 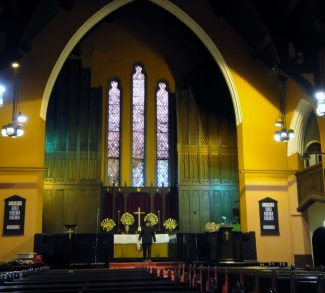