Albert Faurot was an American missionary-musician, pianist, conductor, opera producer, and (in a small way) philanthropist. A graduate of Park College and the Oberlin Graduate School of Theology, he came to China in 1936 to teach music at Foochow College for the United Board for Christian Higher Education in China. He later taught at Hwa Nan College, Foochow Christian University, and the National Fujian Academy of Music. In October 1950, he was ejected from China along with all other foreign missionaries, and taught for one year at Kobe College in Japan. In 1952 he moved to the Philippines. As a choral conductor, arranger, and concert pianist, he gave what were probably the Chinese premieres of many important 20th C. works, from Randall Thompson’s Alleluia in Fuzhou in 1950, to George Crumb’s Makrokosmos in Beijing in 1981.

In one of his earliest published writings, he tells an amusing story which nonetheless points to the large role played by the reed organ/harmonium in missionary life in China in the second half of the 19th, and first half of the 20th centuries. He doesn’t give any source for this, but it is worth reprinting here anyway:

A missionary who arrived at the turn of the [20th] century tells of waking the first morning to hear in the girls’ dormitory the sound of a dozen little [reed] organs being played. For several mornings this continued, the scales and arpeggios and little pieces starting promptly at six. On inquiring of the Chinese Dean the reason for this, the missionary was told that it was the “six o’clock rule.” The missionary protested that it seems rather heartless to require the girls to practice at six on winter mornings, in the dark, unheated rooms. “Oh,” explained the Dean, “the rule is not that they must practice at six, but that they cannot practice before six. Otherwise they would begin in the middle of the night! But nothing,” the Dean continued, “could prevent them from practicing silently on the organ key-boards, until the clock struck six, when their little bound feet began pumping the bellows.”[1]

In Faurot’s youth (he grew up in the American Midwest) the term, organ, usually meant reed organ/harmonium, especially in mission contexts. If this story is true, then these were probably ‘baby organs’ of the melodeon type. Such instruments were not only imported, but were already being manufactured in China at this time by both missions as well as by commercial firms, such as Moutrie in Shanghai. They were small, often built to fold up into a box, and relatively inexpensive (see 1933 advertisement from the Lazarist establishment in Beijing.) While the Project does not survey reed organs, these kinds of stories (funny or not) add to a body of literature showing how the organ and organ literature were dispersed in China before 1949.

POCP founder Prof. Urrows is currently working with Silliman University in Dumaguete in Negros Oriental, Philippines (where Faurot taught from 1952 until his death) on a research project documenting the life of this important American musician, who had a lasting influence in the three Asian countries (China, Japan, the Philippines) where he taught and concertized (he is mentioned briefly in connection with FCW1915.) A Festschrift of Faurot’s writings is planned for publication next year in connection with the thirtieth anniversary of his passing. 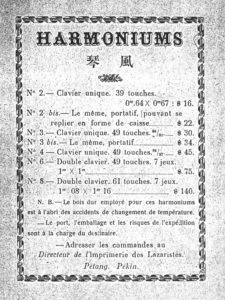