This account of Christmas Eve and Christmas morning masses at Dongjiadu (the Church of St. Francis Xavier, site of the famous bamboo organ [SHA1857]), appeared in the journal The Far East in March 1933. It was written by Roger Doherty, SSC (?-1980), a Columban (Maynooth) missionary who at that time was living in Shanghai and studying Chinese.

This article not only mentions the organ, but in its description also reflects the changes in liturgical practice brought about after the First World War by the increasing indigenization of the Roman Catholic church in China during the Republican period. All in all, it is an interesting historical record, set almost 90 years ago in a Shanghai still tense from the ‘January 28 Incident’ (which actually occurred between January and May of 1932). This was the first major conflict between Chinese and Japanese troops and civilians within the city limits of Shanghai prior to the Second World War, and Doherty alludes to it with his quotation from the Gospel according to St. Matthew. A truce was eventually reached, along with the withdrawal of Japanese troops from the International Settlement; but this only lasted until 1937, the outbreak of the Sino-Japanese War, and the Battle of Shanghai, which the Japanese decisively won.

The Far East, founded in 1918, is still published today and is now called Columban Mission. Further information can be found here: https://columban.org/magazine

“…Father Collins and I go off to assist at the Cathedral [sic.] of St. Francis Xavier [dongjiadu, Tungkadoo.] The priests have been busy hearing confessions all day and are still busy when the congregation begins to arrive for Midnight Mass. What a sight to see them coming! Old and young, rich and poor hurry in, carrying their umbrellas, in the pelting rain. Some arrive in rickshaws, a few in autos, but most of them on foot.

The church is packed to overflowing. It is brilliantly lighted with electric light. All the pillars are draped with great red hangings, inscribed in large Chinese lettering in gold braid. The altar and sanctuary are one forest of green leaves and red flowers—for red is the royal color in China. On the epistle side of the church, just outside the sanctuary is a beautiful crib [nativity scene].

The Chinese love all our ceremonial, but that of Christmas seems to have claimed a special place in their hearts. The priests will have to labor all night to satisfy their needs. Father Collins will celebrate Midnight Mass, during which I am to distribute Holy Communion with the assistance of Father Tsang, if he can leave his confessional. I will say my three Masses at five o’clock, and Masses will go on all morning until High Mass at eight. Each Mass will have its big congregation.

A joyous peal of bells announces that it is midnight, and we form a procession in the sacristy. A little army of acolytes is ready. They are a gorgeous array in long red cassocks, lace surplices, and blue sashes with gold braid. They carry torch-lanterns, some red and some blue, with gold crowns. In the midst, in a cloud of incense from glowing censers, a red-gold throne is carried shoulder-high and on it the image of the Babe of Bethlehem.

The procession marches out through the sanctuary and down the church. At the door a fusillade of firecrackers salutes the Christ Child. Through the church, the people chant their prayers aloud in their characteristic fashion, so impressive to the foreigner. “The Kingdom of Heaven suffereth violence and the violent bear it away” [Matthew 11:12]. The Chinese must surely carry it by storm.

The procession returns to the sanctuary and Mass begins. The organ thunders forth the Adeste [fidelis], the same that makes the Christian heart beat faster the world over. It is taken up by a well-trained choir and their Latin words are clear and distinct. Then follows the scarcely less-impressive Angels we have heard on high, sung in Chinese up to the joyous refrain, Gloria in excelsis Deo. These are the hymns we have heard at home on every Christmas night since childhood, and hearing them tonight sets us thinking. Time and distance vanish. These hymns seem to typify in a beautiful way the unity of the Church.

The bell announces that the Communion time has come. The congregation presses forward to the altar rails. Two priests distribute Communion up to the end of the Mass, all through the second—and still the crowds come—until nearly the end of the third Mass. It is truly edifying and awe-inspiring. Each of us must have administered Communion to about a thousand persons.

After the Mass, we retire to snatch, if we can, a few hasty hours of sleep. Masses will begin again at four-thirty, and will continue all morning until the High Mass. The scenes of midnight will be repeated, and hundreds more will receive their Eucharistic King.

At eight o’clock we are in readiness for High Mass. The big organ [SHA1857, in its 1925 renovation] peals forth the music of the Mass. (By the way, this organ is unique. It is said to be the only one in the world that has its reeds [sic., pipes] made of bamboo.) A sermon is preached in Chinese. All listen with rapt attention to the wondrous story, ever old but ever new, of the Babe of Bethlehem. The Puer natus est nobis is sung afterwards. The Church is filled with the truly Christmas atmosphere. Old and young seem imbued with it. Even the babies are held aloft by their mothers to gaze with wondering eyes at the lights and flowers around the altar and crib.

When Mass is over, the congregation is in no hurry to go. Many remain on their seats, chanting their prayers together aloud. The space before the crib is full.

We return to the Church, now half-empty. Most of the lights are out, but there is still an odor of incense and flowers in the place. We go up the dimly lighted aisle and pray with those at the crib. It is a beautiful one. The cave is in a wall of very real-looking rock, twenty or thirty feet high. All the way up there are twinkling lights in the clefts of the rocks, and over all the Star of Bethlehem shines.

Soon all are gone except for one little group before the crib. It is a family group, the older ones marshaling the younger and all reciting prayers aloud together. Surely Jesus and Mary and Joseph are looking down on them from Heaven. What a shower of graces must descend on them, and on the land of China, this glorious Christmas of nineteen hundred and thirty-two!

After leaving our sacred vestments in the sacristy, we go around to the main door to see the people coming out. A Chinese crowd is no new sight to us, but we feel wonderfully drawn to Chinese Christians who are united to us in the Faith, and especially to these whose fervor had so much impressed us. What a pity we do not yet know enough of their language to mingle among them and talk to them!

Some of the little boys approach us with a friendly smile, and form a little group around us. Each as he comes before us, places his heels together and makes a most graceful bow. The smile says plainly, “Fathers, you are welcome to our church. We wish you a happy Christmas.”

We say in our best Chinese, “Excellent little boys, God bless you. We wish you a happy Christmas.”

And they understand and smile more brightly than ever.” 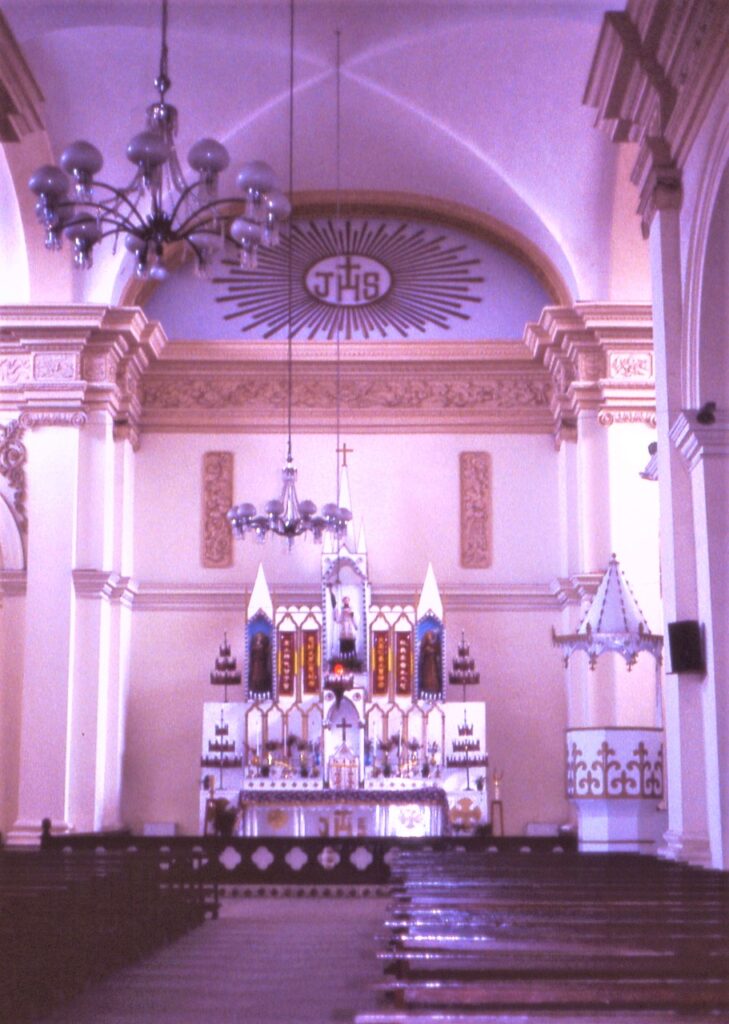 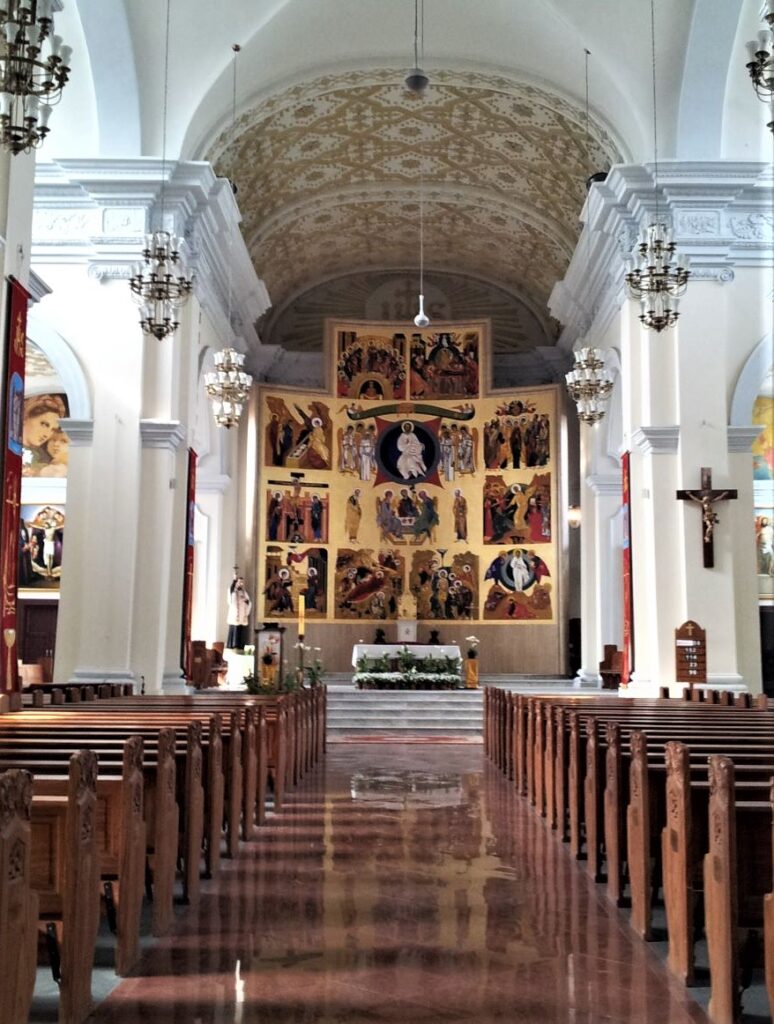