In Keys to the Kingdom, a variety of partial transcripts of interviews conducted by The Project over three decades appear. Sometimes these accounts are shorter than a full sentence, sometimes they amount to several paragraphs. One of the longer reports (see pp. 298-99) was the result of a 1998 interview with the former curator of SHA1934a, the 3-manual Austin organ installed at what was then the American Community Church in Shanghai. The informant detailed for me its destruction by Red Guards in mid-August 1966.

Recently I picked up a used copy of Colin Thubron’s travel narrative, Behind the Wall: A Journey Through China (1987). This was one of a number of such accounts published in the 1980s by famous travel writers who had the opportunity to visit China during what is called the ‘normalization period’ following the fall of the Gang of Four in 1976. Thubron was traveling in China in the autumn and early winter of 1985, mostly by rail. He interviewed staff at the Shanghai Conservatory, and then recounts that he visited (seemingly by accident) the nearby Community Church, by then known (as it is today) as the International Church.

While it is impossible to say to whom he spoke to in 1985, his account completely confirms that given to me 13 years later:

“Walking one day along a suburban street [Hengshan Lu], I glimpsed behind high walls the chancel of a church, and snooped into a close where a mullioned vicarage stood green with ivy. Even the flowers looked English. Down the nave the dark-wooded pews and the clouded glass spread a liturgical somberness, so that I did not notice the sacristan until he had flitted up behind me – a wraith of a man with delicately boned features…He waved his arm about the nave. ‘The harmonium is relayed by microphones, since our organ was smashed in the sixties.’

The Cultural Revolution: its rupture lay across every past. Even in the present people lived with its detritus – split families, brutalized psyches, a whole skein of invisible divides. The old man sat down in the pew beside me: his height seemed to remain the same. ‘The organ was a gift from America, but it was so old that they had no spare parts for it.’ He spoke of it with tenderness. ‘And do you know who broke it? Red Guard students from the Shanghai Music Conservatory. Can you understand that?’ He put on his glasses as if this might help. ‘I can’t. Nor how they could break our violin.’ He said ‘violin’ in English. The word’s poetry seemed suddenly tragic. ‘How could anyone break a violin?’

‘As for this place, it was used as a rehearsal studio for those Revolutionary operas.’ We sat in a momentary silence, facing the altar where the makeshift stage had once usurped the sacraments under the voiceless organ. ‘What I don’t understand,’ he said, ‘is that nothing inside those young people told them they were doing wrong…’”

The comment about ‘spare parts’ probably has to do with the effort in the early 1950s to acquire a new blower for the organ, which was prevented by a U.S. State Department decision that it would be “contrary to the national interest.” The harmonium mentioned may have been the large 1931 Watkins and Watson 2-manual and pedal harmonium I noted in the former Alumni Room in April 1990, less than five years after Thubron’s visit (see photos below.)

Although this is a sad story, it is important that it continued to be told. Thubron was able to record this account less than a decade after the end of the Cultural Revolution, and it is helpful confirmation of the general accuracy of the accounts which I obtained between 1989 and 2016. 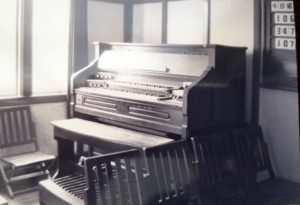 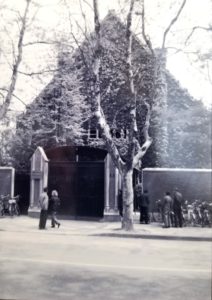