The Pipe Organ in China Project Website: Updates for April 2022.

The entry for HKG1984 has been updated, with the specs and other information following an inspection of the organ this past month.

An interview with Prof. Urrows on the publication of his new book, François Ravary SJ and a Sino-European Musical Culture in Mid-Nineteenth Century Shanghai, was published in mid-April in the online magazine, Interlude HK. It can be accessed here:

This photo, taken around 1900 or earlier, shows a singing class at the ‘seng mou yeu(n)’ (sheng mu yuan 圣母院, known in English as Holy Mother’s Garden). This was an orphanage and school (est. 1867) at Zikawei (Xujiahui), Shanghai, run jointly by the Daughters of Charity and the Auxiliaries of Purgatory, along with the Presentadines, an indigenous religious order of Chinese laywomen established in 1843, who are still operating today with a mother house in the scenic riverine Shanghai suburb of Qibao.

The singing “lesson” has been moved out of doors for the photograph, for the simple reason that there was no way at the time to provide adequate lighting indoors for pictures like this. More should not be read into outdoor photographs at this date, which are necessarily so ‘staged’ for practical reasons. Eleven girls, one wearing a medallion around her neck, are joined by someone playing the harmonium, with another woman to her right who may have been a surveillant (disciplinary staff), and an older member of the Daughters or Auxiliaries, who must have been the teacher. They are reading from a few oblong music books, and a double-sided music rack has been placed centrally to complete the picture.

This photograph is particularly valuable, because it is one of the very few to show music activities in the China missions involving girls and young women at this time. It appeared in: Relations de Chine: Kiang-Nan: bulletin tremestriel (Paris: Compagnie de Jésus, 1913-17), p. 385. 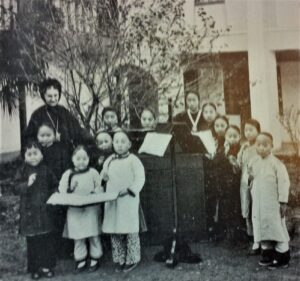