An instrument, described as a “western qin” (西琴), played  by the Lithuanian missionary, Andrzej Rudamina s.j. (1596-1631) for a group of Chinese visitors at the mission at Sanshan in Fujian province on 8 May 1631. (The Project uses FCW (Foochow, Fuzhou) for all installations in Fujian province.)

It is not clear if this was actually an organ, or a harpsichord. But the organ was particularly important to Rudamina’s colleague at Sanshan, Giulio Aleni s.j. (1582-1649) who published the first extensive description of the pipe organ in Chinese in his Chifang wai chi (職方外紀, 1623) and later in more detail in Xifang ta wen (西方答問, 1637).

This organ appears in China during a brief period of legalized trade between Macau and the Philippines between 1629 and 1633. As there was an active organ building trade in the Spanish colony by this time, the Project proposes that this organ may have been imported  from Manila to Sanshan, either via Macau, or one of the Fujian ports such as Xiamen (Amoy) or Quanzhou at this time. 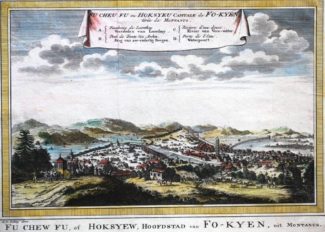