A three-manual and pedal concert organ installed in Hangzhou (Hangchow) by Rieger in the Music (Concert) Hall of the futuristic Grand Theater, designed by Canadian architect Carlos Ott and completed in 2004.

This occurred very shortly after the opening of the five-manual Rieger organ in Shanghai (SHA2005), suggesting that both contracts were let around the same time. This was the second ‘grand theater’ organ built by Rieger. The dedicatory recital was played by Peter Planyavsky on 3 November 2006.

The specs may be seen at: http://www.rieger-orgelbau.com/details/project/Hangzhou/?lang=en

The Grand Theater’s website (in  Chinese only) may be accessed at: http://www.hzdjy.com/ 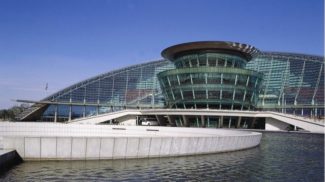