SHA2005 was the largest organ in Mainland China at the time of its erection, eclipsing CAN1995b by the addition of 8 more speaking stops and one more manual. Its 88 stops have symbolic resonance, as ‘8’ is the ‘lucky’ number in Shanghainese, and other Southern Chinese dialects.

The Hall (subsequently renamed the Shanghai Oriental Art Center) is a part of one of the first ‘grand theaters’ (da jun yuan) in China. It was constructed between 1995 and 1998, but had to wait nearly a decade for its pipe organ. The dedicatory recital was held on 7 October 2005, and was given by Olivier Latry.

The specs may be found at: http://www.rieger-orgelbau.com/details/project/Shang/?lang=en

Although the ‘organ race’ (see FAQs) could be said to have started with CAN1995b and the TAO November 2000 cover, it was this installation which really stoked the fires. Especially in Beijing, its size and cost was the source of a ‘loss of face’ to that and other tier-one cities, resulting in what has been a twenty-year period of relentless one-upmanship all over the country.

An otherwise-unidentified news program segment about the organ (possibly from CCTV and dating to around 2015) and the embryonic organ studies program at the Shanghai Conservatory, can be found at: https://www.youtube.com/watch?v=xBFtgzmxunY (the organ was only briefly the ‘largest’ organ in Mainland China, and had lost this distinction by the time this video was filmed.)

Rieger’s website has a brief comment about a practice organ (Truhenorgel) having been installed at the same time, but the Project has no details (yet) about this purported instrument. 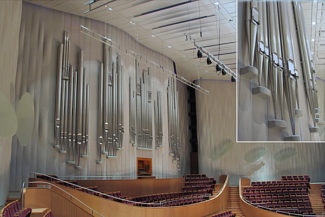