St. Peter’s Anglican Church, West Point, originally established as a seamens’ mission, was built in 1871-72. The church was designed and built by the firm, Wilson & Salway, later much better known as Palmer & Turner, a major architectural and engineering firm in Asia. It was opened for worship on 11 January 1872. HKG1872 was a small two-manual and pedal organ built by William Hill and Son, of London, for the new church on Des Voeux Road West in Hong Kong. Hill and Son built many export organs, and quite a few can still be found in Australia.

Placing the organ in the church is a difficult matter, as there is no record of its arrival and/or installation in Hong Kong. The Hill estimate book (23 August 1872) describes it as having a “walnut or mahogany case, [with] diapason pipes [façade]”. It was ordered initially by someone whose name looks like “Allendow”, and the address 22 St. Peter’s Sq., Hammersmith [London]. At the time, this house on St. Peter’s Sq. in London was occupied by the Rev. William Gifford Cookesley (1802-80), and how “Allendow”, if that is indeed the name, is related is unknown. “Allendow” was later crossed out and changed to “Newton”.

“Newton” was in fact A. Newton, manager of the Hong Kong & China Gas Company, whose gasworks were only a short distance from the church along the quay at West Point, near present-day Whitty St. (named after Newton’s predecessor as manager of the gasworks, R.C. Whitty.) It seems almost incontrovertible that the organ was intended for St. Peter’s, and was a gift of Mr. Newton. A later comment in the order book notes “ordered per letter of Oct. 16 [1872] from A. Newton, Hong Kong & China Gas Co., West Point, Hongkong.” A final, undated remark states “packed & delivered to docks. Apply for shipping order to Warner Waldeck & Co., 11 Old Jewry Chambers.”

This organ was replaced in 1908 by a slightly larger instrument by Henry Speechly & Son (see HKG1908). What happened to HKG1872 at this time is at present unknown.

The ca. 1880-1890 photograph comes to us courtesy of Wattis Fine Art, Hong Kong. It is probably this early due to the sedan chair being carried westwards along the bottom of the image, and the complete absence of rickshaws, which were introduced around 1900. 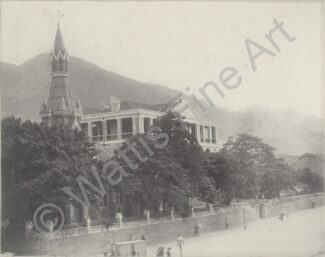