The Roman Catholic cathedral of Hong Kong was opened on 7 December 1888, but construction had taken five years, the foundation stone having been laid by the Vicar Apostolic, Giovanni Timoleone Raimondi (1827-94) on the Feast of the Immaculate Conception, 8 December 1883.

Sometime prior to the start of work on the Early English Gothic Revival building, Raimondi has announced a ‘competition’ for the contract for the organ, and put a Father Bernardo Viganò (1837-1901) in charge of the project. The successful builder was William George Trice (1848-1920.) Trice is not a well-known organ builder today, but the English expatriate who settled in Genoa in 1876 was a forward-looking builder who introduced the innovations of Barker and Cavaillé-Coll to Italy.

When installed sometime in 1889 (it was not ready for the opening of the cathedral), it had the following specifications (in Latin; the numbering is Trice’s):

The Trice organ served the cathedral until the end of the First World War when it was extensively rebuilt by Blackett and Howden (see HKG1921) and again by W.C. Blackett (in 1938) who reused Trice’s case, parts of which survive in situ in the cathedral’s organ gallery. An interesting feature which can still be observed is the use of louvered panels (in place of solid wood panels) for most of the non-structural parts of the upper sides of the case, an attempt to increase air circulation but not noticeable from the floor of the nave. HKG1888 may have been the first pipe organ in China to have an electric blower.

In Keys to the Kingdom (p. 196, fn 435) it is suggested that the price was quoted in francs (‘22,000 franco‘), rather than lire due to Trice’s dealing with a French intermediary on behalf of the Hong Kong authorities. This hypothesis turns out to be incorrect. In 1865 France, Italy, Belgium, and Switzerland formed the Latin Monetary Union (LMU) and established the French 20-franc gold piece as the standard unit of currency for the four countries (a precursor of the Euro.)  Trice’s price would have been the same in either France or Italy, and it is interesting to note how much cheaper Trice’s organ was that the two-manual Cavaillé-Coll organs (PEK1884, PEK1888) sent to Beijing at almost the same time. 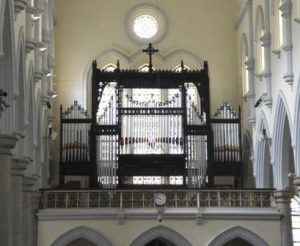 HKG1888, with dummy pipes in the facade.

HKG1888, the louvered panels, not visible from the floor of the building. 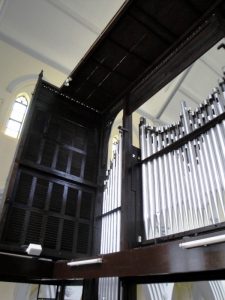 HKG1888, from the back. Dummy pipes (installed as part of a Rogers electronic organ). Note the partial view of the side towers, not original or part of the 1921 or 1938 rebuildings. 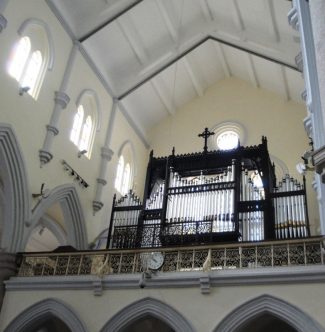