A two manual and pedal organ built in 1895 by the Italian firm, Bianchetti e Facchetti, for the new Cathedral of the Immaculate Conception on Caine Road, Hong Kong. With 55 stops, this was the largest pipe organ ever installed in China prior to HKG1989.

The Roman Catholic cathedral of Hong Kong was opened on 7 December 1888, but construction had taken five years, the foundation stone having been laid by the Vicar Apostolic, Giovanni Timoleone Raimondi (1827-94) on the Feast of the Immaculate Conception, 8 December 1883.

Sometime prior to the start of work on the Early English Gothic Revival building, Raimondi has announced a ‘competition’ for the contract for the organ, and put a Fr. Bernardo Viganò (1837-1901) in charge of the project. Among the builders who sent in projects was G.W Trice, a Scottish organ builder settled in Genoa. For many years The Project believed his bid to have been successful; but it is now known that this was not the case. The rejection of Trice’s proposal seems to have hinged on its high cost (22,000 francs). Even after the cathedral was opened, fund raising continued for the organ, for example a concert was given by the Club Lusitano in the cathedral on 9 May 1889 for the benefit of the Organ Fund. Much of the money was either donated or raised by the Portuguese component of the Hong Kong Roman Catholic community.

The organ was the largest ever built by Bianchetti e Facchetti, and reflected a change from their usual small instruments on the centuries-old Antegnati model with split registers. On arrival in Hong Kong in 1896, it was found that the pipes had been badly damaged in transit. Vittorio Facchetti (1859-1931, see main photo) came to Hong Kong in the middle of the year, and spent at least 6 months repairing and erecting the organ. The dedicatory service and concert was held on 27 August 1896, but it appears that only the Great and Pedal divisions were working at that time (see the following What’s New post for the concert program).

The specs (following the builder’s order) were:

The organ served the cathedral until the end of the First World War when it was extensively rebuilt by Blackett and Howden around 1920-21. This included a new case (still in situ), and probably new soundboards as well, an electric blower, pneumatic action, and the addition of five more stops (unknown, see HKG1921). It was then renovated by W.C. Blackett again in 1938. The organ was restored after World War Two damage in 1949, for which again see HKG1921. It was eventually discarded in the early 1970s. 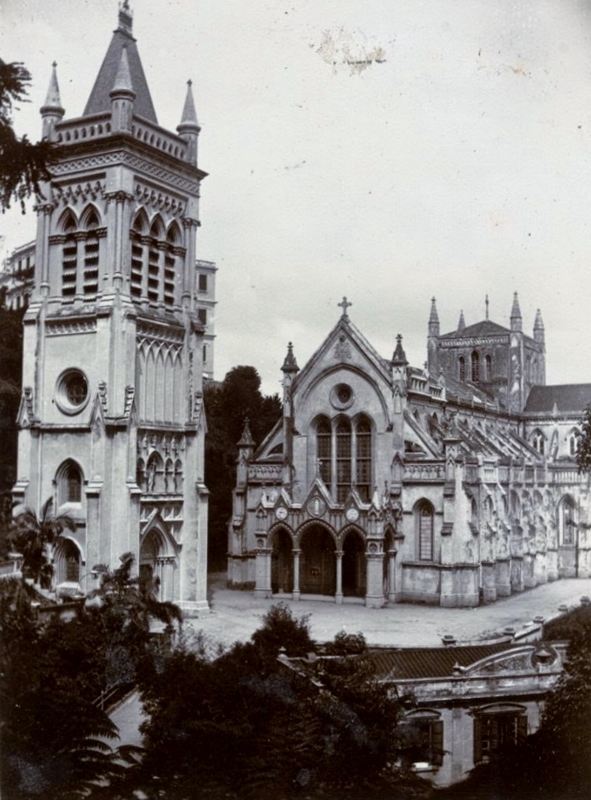 The Cathedral of the Immaculate Conception, Caine Road, Hong Kong, with its original campanile (now demolished).