An organ built by Blackett and Howden, of Newcastle-upon-Tyne, to specs drawn up by the church’s organist, E.J. Chapman. The organ arrived in March 1917, and was installed by William Charlton Blackett (1859-1941), who for the next quarter-century was a major figure in Hong Kong’s organ culture.

The Bryceson organ (HKG1860), from St. John’s Cathedral, had been bought and installed back in 1890 (or possibly later, see What’s New for 30 October 2022). It saw some repairs by Italian organbuilder Vittorio Facchetti (1859-1931) in 1896, and was subsequently rebuilt by Moutrie in 1907-08, with virtually everything except the pipes replaced. But by 1913 it had evidently reached the end of its life and most of it was “sold as scrap”.

The new, partly-pneumatic action organ had the following specs:

It is not clear if the 8′ pedal stops were installed, or only prepared for. Some of the ranks (perhaps eight) in HKG1917 were retained by Chapman from the 1860 Bryceson.

Union Church was badly damaged by bombing during World War Two, and parts of the church were taken away as building supplies for the Japanese reconstruction of nearby Government House. The church was replaced with a new building between 1949 and 1955.

The entire church complex was sold for redevelopment to Henderson Land in 2017, despite protests from preservation groups; it has been demolished and is being rebuilt as a residential property. 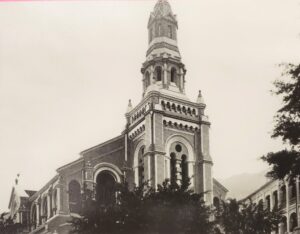 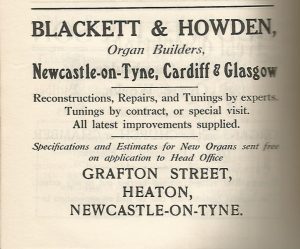