An organ noted by the writer Liang Di (梁迪, dates unknown) who described an organ in the church of Madre de Deus (St. Paul’s) in Macau, probably similar to (if not the same as) the one described eight years earlier by Wang Shizhen (MAC1701):

“The western organ is like a sheng [笙], which has two wings on either side, like the [wings of the] phoenix. The pipes are made of metal (bronze) and are lined up in order from long to short. A wooden case is used instead of a gourd, the bellows are made from leather, which is compressed and released to circulate the wind. The reeds (pipes) sound when the air moves [through them]; striking the keys [“toothpicks”] causes the sound to come crashing down. [While] music is being played in St. Paul’s, the sound can be heard at a very great distance [“from a hundred li”.]” (Liang Di, “Xitang ji –waiguo zhuzhici”.)

This is one of the earliest accounts in Chinese of a pipe organ by a Chinese writer. The ‘deconstruction’ of the organ into the constituent parts of the sheng is noteworthy. 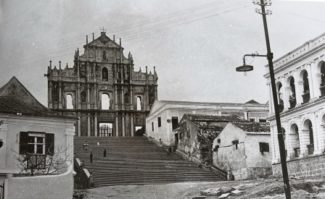