PEK1683 was the third and last of the pipe organs constructed by Tomás Pereira for the Kangxi emperor. It consisted of an organ division of unknown size attached to and located beneath a very tall carillon tower, and was somehow moveable. Pereira wrote in 1682:

“…the King wants me to make a third organ [PEK 1683], but with the most problematic specifications: that it should play by itself without being touched; that it should in the first place be a very elaborate and tall organ of great artifice when it starts to play, similar in sound to [one of] their old instruments, but [at the same time] something completely original. Of the success of this, I will write next year, if I am still living and the Lord keeps me to see his light.”

“I was reporting [in the letter of 1682] on the completion [sic.] of a new organ for the Emperor [PEK 1683] (after many that I have made) in which I made for him [some] new inventions, and which is raised to a height of 12 braças, and plays Chinese melodies all by itself. And the Lord (whose glory in cymbalis bene sonantibus is also [expressed as] a part of this machine), brought this work to His desired conclusion, including by his [the emperor’s] orders the well-tempered bells which play the same tune along with the organ in the same registers.

“This novelty was highly applauded, as novelties are. It was used publicly for the performance of comedies, which the Emperor attended for 10 days, in celebration of the pacification of the [Chinese] Empire. On this occasion, given the height I’ve mentioned, and the organ and bells playing all by themselves, it was the subject of many laudatory comments, which I don’t need to repeat here. I could not possibly take [a] part in these comedies, which are continually played here.”

As with PEK1680 and PEK1682, it seems the barrel-driven mechanisms shown in Athanasius Kircher’s Musurgia universalis (1650) were a stimulus to Pereira and his workers. 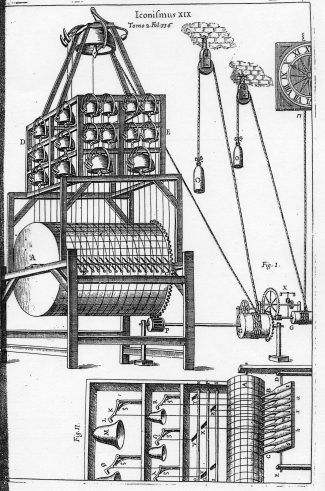