An orgue du chœur installed in the Beitang in 1890. On 15 December 1888 Alphonse Favier wrote to Aristide Cavaillé-Coll to complain about the damage and delays that had plagued the erection of PEK1888. Nonetheless, at the same time Favier also mentioned that he now wanted a choir organ for the Beitang.

Cavaillé-Coll sent a plan for a four-rank “petit orgue” with the choice of the pipes en façade, or in a boite-expressive. The cost with a case was quoted at 5,000 francs (or 4,000 without a case.) Favier remarked: “For my part, I would be willing to pay 3,000 francs for this. I think that it would also be better to order it without the swell box, as this is of no use for accompanying [!]. Please note carefully that the keyboard should be at the back of the organ, and not in front as on the plan, and that the bellows should be at the left side of the organist.”

The orgue du accompagnement, Op. 640, was shipped from Paris in February 1890, and probably arrived in Beijing after the middle of the year.

This was essentially the Grand-Orgue of Model 17B in the 1889 catalog. Cavaillé-Coll’s proposal included a 20-note pull-down pedal, but this was eliminated and the contract price revised down to 2,500 francs.

According to the 1991 article, “A Short History of Pipe Organs in Beijing” by Father Wang Jizhi (see PEK1925a) PEK1890 was transferred to the Nantang in 1958 at the time that the Beitang was taken over as the Beijing 39th Middle School. Nothing further is known about what happened to it after that. 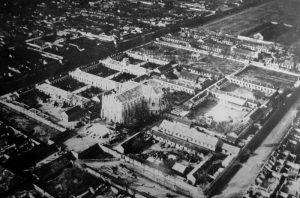 The Beitang, after the Siege in the summer of 1900 (taken from a balloon). 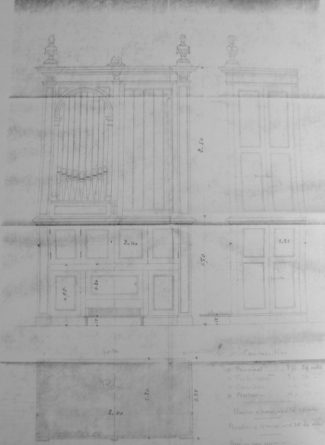