In 2005, two new TSPM (Three-Self Patriotic Movement) churches were completed in Beijing, and for each an organ was ordered from Oberlinger, which had built the organ for the China National Radio recital hall in 1999 (see PEK1999b).

(An additional, smaller organ was built in 2004 by Oberlinger for the Yanjing (Union) Theological Seminary in Haidan, constructed in 1992. The Project believes that this 14-stop instrument is actually the organ (PEK2004b) presently identified as installed in a spurious ‘Nestorian’ church in Beijing. Shifting the Census data is still on hold, pending an inspection of the Haidan organ.)

The two 2005 organs are both installed in ‘official’, government-controlled Protestant churches (the other is on the other end of the city, at Fengtai, see PEK2005b.) As such, the two organs are landmarks in the integration of the pipe organ in Mainland China into worship in its traditional, not to say iconic, role, though limited by acute government oversight. It would appear that they are twins, and have almost-same stop list (PEK2005b is reported to be a II/23 instrument.)

As of 2016, the firm’s website states that it “has its own office in Beijing, directed by Yue Shen-Oberlinger.” The specs were published some time between 2018 and 2020. The church can be found at 60 Dongfeng Nan Lu, East Fourth Ring Road, Chaoyang District, 100016 Beijing. 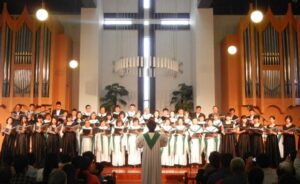 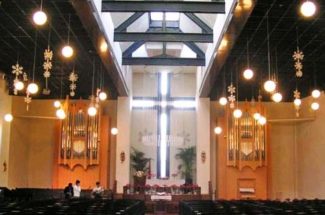