The National Center for the Performing Arts (AKA ‘The Egg’), designed by French architect Paul Andreu, was constructed to the west of the Great Hall of the People between 2001 and 2007. For this massive ‘grand theater’ structure, three pipe organs were ordered from Klais: the present instrument, PEK2007b, and PEK2007c.

This four-manual and pedal organ (Op. 1837) has, among other over-the-top features, a 64′ Vox balenae (voice of the whale) stop in the Pedal division.

The Project has not had the opportunity to survey this instrument. Three professional organists who have played this organ have communicated with the Project over the massive stop list. (Quite a lot of discussion has been entertained in the organ community in Asia on this topic.) All three agree that there is a significant amount of unitizing/transmission in this instrument, although estimates of the extent vary.

The website of the Center can be found at: http://en.chncpa.org/ 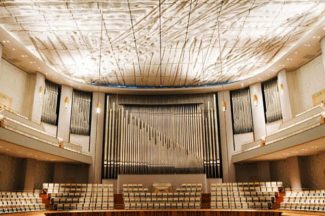