PEK2015c is a medium-sized concert organ installed in the concert hall of the new campus of the Beijing No. 35 Middle School (secondary school; pic from builder’s website). This was the second installation known to the Project in a sub-tertiary institution in Mainland China, after PEK2004a.

The Klais website calls this the ‘Golden Sail Concert Hall’, but this leads to confusion with the well-known Golden Sail (Jinfan) Concert Hall on Beijing’s Wangfujing Street. Nevertheless, there are in fact many musical entities in China now calling themselves ‘golden sail’.

Apparently, Klais also installed a practice organ at the school at the same time (Op. 1941), but no information about this instrument has yet been located. 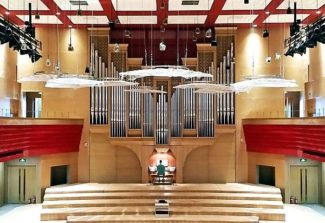