A “grande orgue” of unknown specifications, presumably with bamboo pipes, built around 1859 for the Jesuit church at Zikawei (see SHA1857 for details of the bamboo organs of Shanghai.)

There are no descriptions of SHA1859 or its size or specs; but in the mid-1880s a resident British Army officer, Major Henry Knollys (1840-1930), attended a service there and mentioned that “from the dark recesses of the chapel peal forth the tones of an organ played with manifest taste and skill” (presumably by François Ravary.)

Writing to his friend and former music teacher, Hippolyte Basuiau (1824-86), in 1857, Ravary described how services were accompanied before the organ was built:

“May I give you a small idea of a major feast at Zikawei? Here is the order of service for Easter. No communion this morning, that was held on Holy Thursday. At 8 o’clock, a sermon. At 830 high Mass. The Reverend Father Superior officiated, avec diacre et sous diacre. Our elegant church, especially the altar, was decorated to perfection. 12 choirboys, well vested, surrounded the altar. In the organ gallery, Father Ravary sat at his harmonium, surrounded by 20 musicians. The [first] Messe royale of [Henri] Dumont [1610-84] was sung, two choristers sang their part, the others responded. And everything went well. At the offertory, a grand Regina cœli by Father [Louis] Lambilotte [1796-1855], very well performed, although the tempo was a bit ragged and voices on the first part were a bit thin. At the Elevation, a two-part O salutaris by Father Lambilotte. At the end of the Mass, O Filii et filiae, Chinese melody with Chinese words, a bit like our own tune. This song and its words have come down to us from our old fathers in Beijing. 15 students sang, accompanied by me on the harmonium, and four Chinese instruments; two rather out-of-tune flutes [dizi] and two san [sheng], a curious instrument, a type of small organ of one and half octaves, made of small bamboo tubes enclosing a thin harmonium reed — I enjoy this instrument. These four instruments make up our orchestra.” (François Ravary to the Scholastics of Laval, 28 April 1857.)

The organ appears to have disappeared when the church was rebuilt on an extensive scale in the first decade of the twentieth century, if not earlier. 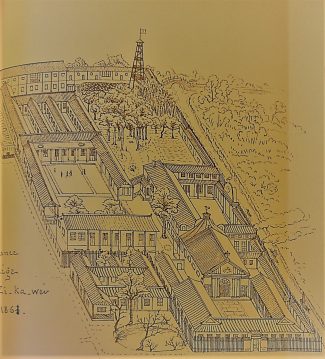