A large chamber organ built for a private client in Shanghai, a certain W.G. Howell, possibly someone connected with the Masons. He may have been related to the Henry J. Howell, who was the consignee of SHA856, and who appears to have later (1882) been Grand Steward of the District Grand Lodge of Northern China E.C.

In the Census (Appendix) of Keys to the Kingdom, this organ is mis-numbered as SHA1862b (it is correctly numbered in the text.) The number of stops is also given as 15, but it appears there were 17 if the divided SW Double Diapason 16′ is counted as one stop.

Gray and Davison’s use of the term ‘chamber’ to describe the organ also calls for comment. It seems this implies that it was a domestic instrument, literally for someone’s ‘chamber’, and that this term distinguishes it from a church organ. It was however the second largest instrument yet sent out to China by any builder at the time.

The illustration shows part of the Shanghai Bund around the time of the installation of this organ. The tower of Holy Trinity Church, home of SHA1856, can just be seen in the distance at the center of the picture. 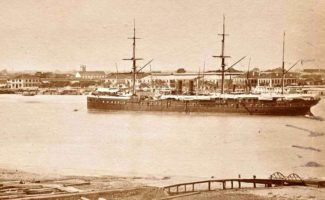