An organ reported in the first German Protestant Church (Deutsche Evangelische Kirche) in Shanghai, built in 1899/1900 next to the German Consulate on Huangpu Road. Although no specifics have yet been found, it must have been at least a II/Ped. instrument. Hong Kong organist George Grimble (1867?-1933) played an elaborate recital on the organ on 20 November 1902, accompanied by the band of the German warship, Hansa (see review in the China Mail, 26 November 1902.)

Opened in 1901, the church was designed by the resident British architectural firm of Dowdall and Moorhead, who later built the Cathedral of St. Ignatius at Zikawei. When finished, the DEK church was one of the tallest buildings in Shanghai. The west window was a personal gift of Kaiser Wilhelm II, given in memory of Baron von Kettler, assassinated by the Boxers in 1900. 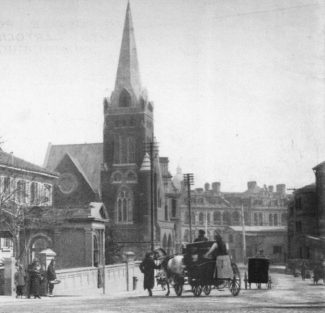