As early as 1926, plans were set in motion to build a new, more central church for the growing German community to replace the 1901 church, site of SHA1901. An inquiry was made to the organbuilding firm of Steinmeyer in July 1926, asking for a proposal for a “medium-sized organ” for a church seating 400-500 persons.

The chaotic political situation of the following years in China, as well as the stock market crash of 1929, put the project on hold. It was not until 1930 that the old church was sold and demolished, and a new lot on Avenue Haig (today’s Huashan Lu) purchased. At this point, the great Slovakian architect, Ladislav (L.E.) Hudec (1893-1958) was brought in to design the building. Pastor Ewald Krüger wrote to Steinmeyer in May 1930 and asked somewhat improbably if the quotation for a II/16 organ sent by Steinmeyer in 1926 was still valid. Steinmeyer replied diplomatically that it was not, and that it would have to be raised by 300 US dollars to 3,880 USD (all prices were quoted in USD due to rampant inflation in late Weimar-era Germany, which had left the Reichsmark almost valueless.)

Hudec himself designed the organ façade as an integral part of his ‘expressive architecture’ (expressive Architektur, not related to ‘expressionism’, as it is often mistranslated) as revealed in both the church’s interior, and exterior which featured the main nave rotated 45 degrees to the street, the bell tower, and the entrance. The bells came from the renowned Bachert foundry in Karlsruhe.

For the new organ electro-pneumatic action was chosen, as it could then be played in the event of a power outage if blown by hand. The organ was tested and approved by organist Edmund Hohmann (1858-1935) on 30 December 1931. Norddeutschen Lloyd agreed to ship it freight-free from Genoa, and it left for Shanghai on 30 January 1932 on the cargo ship Sauerland, with the Monteur, Fritz Enzensperger, on board. By mid-June the organ was in place, and on 23 October it was played for the dedication of the new church building, “assisted by an orchestra, [which] rendered pieces of Mozart, Bach, Glück, etc.”

SHA1932 holds a special place in China’s ‘organ moment’, as it was one of the few in pre-1949 China to reflect the Orgelbewegung movement of the early twentieth century. The 1931 proposal even added stops to the 1926 plan, including the 3-4 rank Mixtur “which is also very important. The stop specifications themselves are [now] more Baroque”, as Steinmeyer pointed out. After reviewing the specs, Hohmann further recommended separating the Nasard and Terz on the Swell (they had originally been combined into a double-draw Sesquialtera), and pointed out that they could still “be combined into a sesquialter especially for the very effective performance of a cantus firmus in the melodic line of an organ trio.”

The Monteur, Enzensperger, also made a trip to Qingdao to work on the Link organ in DEK Christuskirche (see TAO1909) before returning to Germany at the end of June 1932 (the grateful congregation gave him a Chinese shell-cup made of silver.)

Hudec’s strikingly modern church was, sadly, pulled down in the late 1960s or early 1970s as part of a redevelopment project, and the site is now occupied by the Hilton Hotel. The organ appears to have gone with the church, if not earlier. The 1932 Bachert bells, however, are reported to have been moved at that time to the tower of Moore Memorial Church, although some sources suggest this might have  happened as late as 1988. 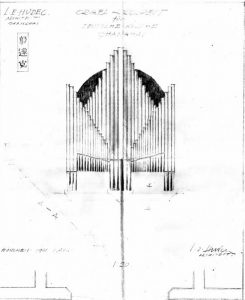 Hudec’s original design for the facade of SHA1932.

The Gunter Hartnagel collection has a number of very fine photographs of the church, both exterior and interior, including several of the organ, for example: https://goo.gl/images/M8w7Zf 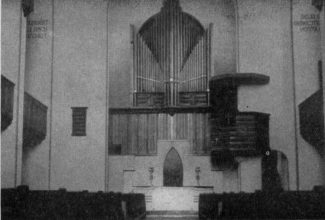