In April 1908 construction began on a church for the German Protestant community on the top of a hill slightly east of the Europäerviertel  in German ‘Tsingtau.’ The architect was a German working in Tianjin, Curt Rothkegel (1876-1945), and much of the construction material was shipped from Germany by the Hamburg contractors. The Jugendstyl building of the Christuskirche is one of the most iconic churches in China and well-known today.

For the new church an organ was commissioned from Link in Giegen an der Brenz. Reinhold Link (1888-1946) himself traveled with the II/20 organ to Qingdao, and installed it, with the local assistance of 20 Chinese workers, between 21 June and 26 August 1910. This was a pneumatic-action organ with cone-valve chests (Kegelladen), and could be blown by hand in the event of a power failure.

TAO1909 combined a kind of Orgelbewegung-influenced Manual I with a more traditional, and French-type Manual II (although not under expression.) The absence of reed stops is noticeable, and probably due to the difficulty in finding anyone to tune the organ. Rothkegel had not informed Link that there was to be a circular window at the back of the gallery, and Link’s original plan to place the tallest pipes in the center had to be changed at a late date, leading to many maintenance problems, along with the usual difficulties in a climate that alternated between dry and damp.

The church and the organ were dedicated on 23 October 1910. The organist who played for the dedication was one of the teachers at the German school in Qingdao, Reinhard Schuhmann (1883-1950), but all we know of what he played was a “Festpräludium” by Wilhelm Volckmar (1812-87). Other works, including the “Hallelujah’ chorus, featured an orchestra playing along with the organ. Schuhmann shared the duties as organist between 1911 and 1914 with another teacher, Willy Werner. When the First World War broke out, he was in Hong Kong, and was eventually arrested by the British and sent to an internment camp in Australia. Other organists at the church included businessman Arnold Mändler (to his death in 1936), Hulda Rieder-Tschiemer (a Swiss missionary, 1936-43), and Viktor Kusik (1943-47) a student from Harbin at the German school. Further information is available at http://www.tsingtau.org/schuhmann-reinhard-1883-1950-lehrer-an-der-dch-dann-mittelschulrektor

By 1932 the organ was in great need of an overhaul, and learning of the Steinmeyer organ to be installed later that year in Shanghai (SHA1932), the pastor of the Qingdao congregation, Wilhelm Seufert (1885-1974) contacted the pastor of Shanghai’s DEK church, Ewald Krüger, who in turn asked Steinmeyer if Steinmeyer’s monteur, Fritz Enzensperger could make a trip to Qingdao to tune the organ, and if possible add a Swell shade (Jalousiefront) and install new bellows which Link had sent some years previously. Even though Link was still in business it seemed too costly to send out a builder from Germany just for this, and Steinmeyer asked Link for the organ plans. Once the plans were seen it was obvious that a Swell shade was an impossible alteration. When Enzensperger got to Qingdao, he nevertheless cleaned and tuned the organ and made “not only a series of very necessary repairs, but also a variety of considerable improvements, and in particular the installation of a crescendo pedal [Registerschweller].”

According to an informant interviewed by the Project in Qingdao in 2010, the organ was destroyed in 1966 during the Cultural Revolution, and a special and grandiloquent end was arranged: it was hauled out of the church, put on a fishing vessel, taken out to sea and thrown overboard. The Project was also told in 2010 (by two members of the German community then working in Qingdao) that the story of the organ’s destruction was just a ‘fairy tale’ (“ein Märchen”). They insisted that it was dismantled in the 1950s, and “sent to Beijing” where it was “carefully preserved as a cultural relic.” The Project believes that this is just an iteration of  ‘organ-in-storage’ trope that has been gaining in popularity since about the year 2000 (see FAQs).

Further pictures of the church and the organ can be found on the website of the German Bundesarchive, and here:

For the tracker near-‘replica’ (and minor expansion) of this organ built for the church in 2010 by Jaeger & Brommer, see TAO2010. 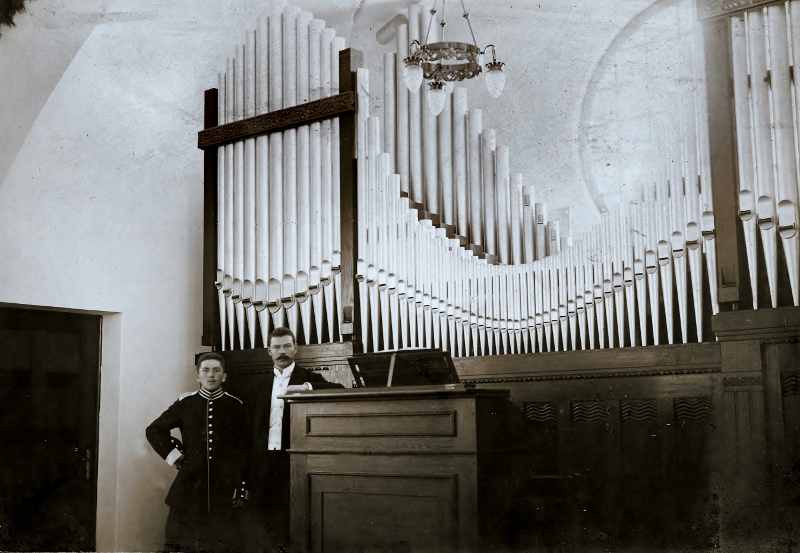 Reinhard Schuhmann, with a student from the German school in Qingdao, and TAO1909. 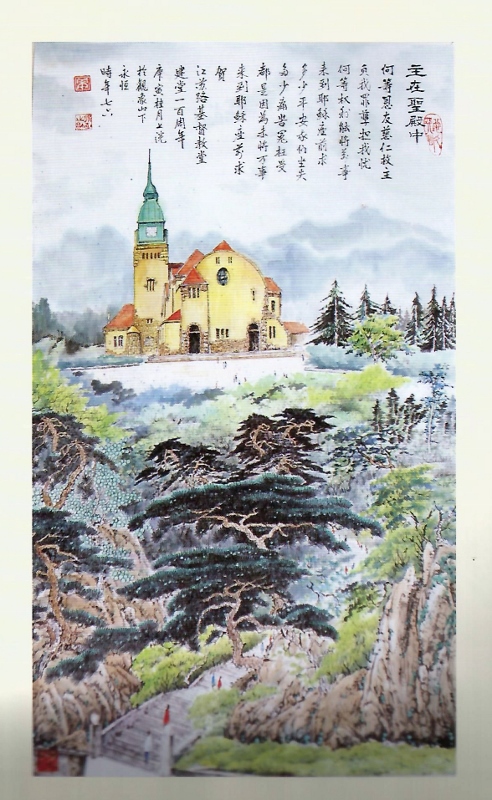 The Christuskirche seen through Chinese eyes. 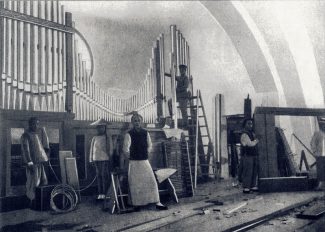