The Church of St. Louis in Tianjin figures in anecdotal accounts which place an organ in the 1872 building prior to 1949. In 1915, a Mr. L. Joop was named as the organist at a wedding. In the 1930s, a Madame Vernaudon, a Madame Teou, and a Madame J. Lambert were cited as organists at the church. Oral accounts collected in the 1960s and 70s from elderly residents of Tianjin described the organ (TJN1915) in very general terms:

Most of the people who went to the Church of St. Louis were from Western countries, such as America and Europe. The church was very elegantly decorated. On either side of the high altar were two statues: one was of Louis IX of France, the other of the French heroine, Joan of Arc.  A white marble tablet was inset into the western side of the altar, on which were engraved in French the names of the church’s [major] donors.

The semi-circular windows on the sides of the church were filled with diamond-shaped stained glass. When the sun shone through the glass down into the church, people inside felt the very mysterious mood [created by the effect.] The choir loft was accessed via a circular staircase.  There stood a Western pipe organ. The red copper pipes which reached as far as the roof were lined up along the wall. When it was played the sound was harmonious, very loud, and robust. The [pitch] range of the organ was very great. When the organ was being played, and the choir was singing, the atmosphere was very solemn. It was said, that when the organ was playing the silence of midnight, the sound of the organ carried a long distance [lit., “more than 10 li”.] They said that this was one of two organs in Tianjin at the time.

Although the organ was installed prior to 1915, nothing further is known about it, and this is a date of first report. For the Feith organ, relocated from Germany in 2015 for the restored church, see TJN2015a. 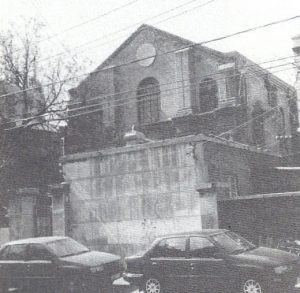